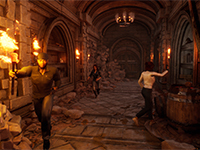 A new horror title, Macabre Museum, has been announced with Macabre Museum giving us a new way to experience a very dark museum setting

For those out there that might have always wondered what Night At The Museum might have felt like as a horror movie instead can now look forward to Macabre Museum coming to the PC. This is the upcoming title that Different Monster is working on that will put us all in the place of said museum where everything that comes to life wants to just end ours. All in a new co-op style of game that will have many other genres of gameplay elements mixed into it all for Macabre Museum. All so we can survive the night and make it out to loop through it all again for fun. As long as the game is able to keep things feeling different no matter how we choose to play it all.

As you can kind of see in the announcement for Macabre Museum, we will be taking on the role of one of four characters in the game. An Influencer, Private Investigator, Archaeologist, and Journalist that have found themselves locked in the museum for one reason or another. That is where we will have take on the role and join others, if we want, to solve puzzles, find secrets, and survive the various cursed exhibits that are all out to kill us in some form or another. I have a feeling it will not be as intense as the video here for Macabre Museum makes it all feel when changing location to location, but it truly would keep the anxiety on a high if it did. We will only have to wait and see for now as the updates for the game's development keep flowing out there for us all.

Macabre Museum is a 1-4 player co-op adventure horror game. Explore the mysteries of a museum like no other; alone or with friends. Wield historical weapons, defeat different monsters, avoid brutal traps, and solve strange puzzles as the exhibits come alive at night…

It’s late in the evening and the museum has closed. Play as one of four characters: an archaeologist, influencer, private investigator, and journalist who have all been locked in. Trapped together, you must navigate a terrifying tour through time as you venture into the now living exhibits, discover secrets from the past, and find a way to escape before you become ancient history.

Does the premise for Macabre Museum pique your interest at all or would you want it all to play out in a different way? Do you suspect that there is a good reason for each character type or will that not matter more than the skin you are using? How many different exhibits will we have to go through and will there be a balance between all of them along the way? Help us all figure out the answers to these down in the comments and then discuss everything that comes from that. We will add more for Macabre Museum as soon as we get anything, so be sure to keep a close eye on the site for those updates and much, much more along the way out there.