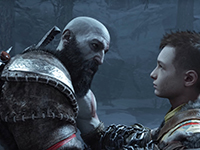 A new story trailer for God Of War: Ragnarök is here to prep us all for the next big chapter into the God Of War saga

It feels like November 9th is never going to get here with each new epic bit of content we have for God Of War: Ragnarök get dropped out there. This latest bit is just as epic when it comes to everything Santa Monica Studio has offered thus far, but it does dive a bit into the story of things, so get ready for a few possible spoilers. Not that we have been able to always call the story beats of any of the God Of War titles as they hit, but just needed to note for those that want a completely pure experience when it hits the PS4 and PS5. Even if it does feel like it is just highlighting a few things we all knew was coming to the game beyond more of the parent struggles of raising a teenager in some harsh times out there.

For those still following along and not worried about spoiling things, here we get to see how things have progressed a bit further and how Atreus is becoming more and more of the Loki we can expect in a God Of War title. We have a bit more to see from Týr, who I think will play a larger role in how things will progress not only in this story but in any of the future options the team might be going with. It is an easy way to explain more about how Kratos and family will be going forward in the IP beyond what happened in God Of War III. Not to mention explain how we are going to be to the new and old lands in a different way. We get a few looks at some here with one being an underwater setting too. I know I am getting excited, even if that means that means we might have to deal with the same issues we normally do when it comes to those kinds of levels in video games.

Set out on an epic and unflinching journey as Kratos and Atreus struggle with holding on and letting go.

Witness the changing dynamic of their relationship as they prepare for war; Atreus hungers for knowledge to help him grasp the prophecy of “Loki”, as Kratos struggles to free himself from the past and be the father his son needs. All the while, the eyes of Asgard watch their every move…

God Of War: Ragnarök is coming to PS4 and PS5 on November 9th.

Have you still been able to stay spoiler free for God Of War: Ragnarök so far or is it hard to do that with how much epic content we are given for the game? Do you think that we will see other lands beyond the nine Realms in this game or will that just be a tease at the end of the game after we experience all of the new elements mixed in? When do you think this fight with Thor will take place and will it be similar to the way we were introduced to Baldur in the first entrance into the Norse period of the IP? Let us all know down in the comments what you are thinking and then feel free to discuss it all with everyone. For more to come for God Of War: Ragnarök, all you have to do is keep checking in here for all of that and much more. I am sure it will still be as epic going forward.