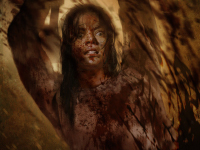 A new tease for Evil Dead: The Game shows off that we might be seeing a character from the 2013 Evil Dead in the mix

Mia Allen Is Officially Coming To Evil Dead: The Game In September

Mia Allen is coming to Evil Dead: The Game as a Survivor this September as part of our next DLC update!

Mia is included in Season Pass 1. Stay tuned for more news on the next update which will also include free content for all. pic.twitter.com/vrZGXAcn5L

The heroes keep coming here for Evil Dead: The Game and this next little tease makes it feel like we will have a whole new hero in the mix and not just a skin. Before you think that Boss Team Games is creating something fully new for the game, I mean it is new to the game and not to the IP. As long as we are reading what came up on the Evil Dead: The Game social media accounts. Given what it was, though, it is hard to not see that they are alluding to Mia Allen getting ready to kick deadite faces in sometime in the future. Unless they were possessed and just trying to get us all to throw more souls at the game.

If you are not fully up on your Evil Dead lore, Mia was the lead character from the 2013 film that many fell in love with. Mia was also one of the other heavily rumored and requested characters for the expansion DLC that the Season Pass claimed to offer up. The following tease definitely shows Mia off doing some amazing killing out there, but it is still more of a tease and nothing is fully confirmed as of yet. This also means that there is no word on if the actor will be back from the film to reprise the role for Evil Dead: The Game too. Given how things have gone for the game so far, I would guess that they would, but we will have to wait to see. Unless this is something for the next film that is still coming here.

Did you always expect this character from Evil Dead to head on over to the game or is this a bit of a shock to you? Do you think she will be more than a skin for another character and which class will Mia get placed into? Is this something for the upcoming film instead or will that be another character and level addition down the line? Give us all of your thoughts on this down in the comments and then feel free to discuss it all. More for Evil Dead: The Game is on the way, so be sure to keep checking back in for all of that and everything else we have to share. I am sure it is going to spike up here soon with the spooky season around the corner.