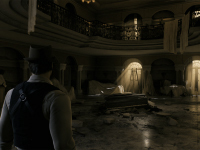 Alone In The Dark

Many have been asking for it for a while now, and here we go with a whole new Alone In The Dark title on the way to us. Not in terms of a sequel, remaster, or remake but in the way of a re-imagining of the original trilogy with Pieces Interactive and THQ Nordic behind the wheel for this endeavor. All of that and the look of a new Alone In The Dark title hitting the PS5, Xbox Series X|S, and PC when it all does finally come. A nice and solid mix of things if I do say so myself. That is if we are going to ignore the creepy trailer that also came along with this big announcement for the game here.

It is still very early from the announcement of Alone In The Dark to actually have anything of substance to talk about for the game as of yet. That will most likely happen during Gamescom this year, but we do have a solid look at a new cinematic trailer that gives us all a feel of how dark and twisted it will be here again. More so since the story will be something new for the Alone In The Dark line along with a re-imagining of things too. Maybe this means that we will see some kind of new twist and change to the IP along the way, but we will have to wait to see all of that. Have a gander at the new announcement video we have down below. Just know it is going to be filled with all manner of terrible imagery. You have been warned once now.

Alone In The Dark — Announcement

Return to Derceto Manor in this reimagination of Alone In The Dark, a love letter to the 90’s cult classic horror game.

Deep in the 1920’s south, Emily Hartwood’s uncle has gone missing. Together with private investigator Edward Carnby, she embarks on a journey to Derceto Manor to uncover the secrets of this mysterious place and the circumstances of her relative’s vanishing.

Encounter strange residents, nightmarish realms, dangerous monsters, and ultimately unveil a plot of rising evil. At the intersection of reality, mystery, and insanity, an adventure waits that will challenge your core beliefs. Who can you trust, what will you believe, and what will you do next?

Alone In The Dark is coming to PC, PlayStation 5, and Xbox Series X|S.

How shocked are you to find out that Alone In The Dark has a whole new title on the way to us all now? How different do you think the game will be or will it keep things close enough for the long-term fans will still be able to see it all? Would you rather have seen a whole new title instead of a reimagining of it all or will this be like some of the other titles that have done the same in the past? Go ahead and let us all know your thoughts on this down in the comments and then feel free to discuss it all as you so wish. More for Alone In The Dark will certainly be on the way to us all here soon. Please keep checking back here for all of that and everything else that we will have to share on the site for you all.