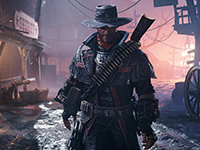 September 20th is rolling up quickly for us and that means that Evil West could be on our PS4, PS5, Xbox One, Xbox Series X|S, and PC soon. Then we will truly know what Flying Wild Hog has been building this whole time. But that does not truly tell us all why we should be amped to get Evil West as of right now. That is where the latest trailer comes in so we can all get a better understanding of how the vampire-hunting western is going to feel once we let it out of the coffin. If not also give us some amazing new visuals to look at for the game as we wait for the next month to pass right on by.

For those that are still here, it looks like the basic elevator pitch that is now given for Evil West is if you mixed God Of War with DOOM but placed it all in the American western setting. There have been a few hints to exactly this in the past videos we have seen out there for Evil West, but it is always nice to get some solid confirmation for it all. Even if it does not look like the gameplay will be as epic as God Of War usually is, but it does look as if we will have some of those amazing combos and finishers too. Then again, we have only seen the gameplay that has us on the ground shooting our guns and using supernatural abilities to hunt these vampires so far. Maybe the other elements will be hidden outside of the cinematics, for now, to make sure we are surprised still.

Flying Wild Hog, the studio behind the brutal and brilliant Shadow Warrior series, is back with another cracking combat adventure in the form of Evil West later this year.

Splice God Of War with DOOM, throw in a splash of Van Helsing, move the setting to the American frontier, add in a shedload of guns and supernatural powers, and you’d be pretty close to the fantastically chaotic spectacle that is Evil West.

If that sounds exciting, we’re right there with you! We cannot wait to get stuck into this one, and we’re delighted to be helping publisher Focus Entertainment bring it to retail here in the UK later this year.

Did you suspect this was always going to be the case for Evil West or is this good news to you hear? Do you think some of the more epic elements will be in the final game or only in the cinematics to drive the story? Could we see some of the FPS features for DOOM in the end or is that just to explain the gunplay and gore? Feel free to tell us all what you are thinking and then feel free to discuss it all in the comments. For more on Evil West, be sure to keep checking back in on the site for all of that and much more. I am sure we will have so many more surprises ready for us as we get closer to launch.