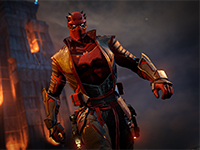 The fourth and final member of the Gotham Knights is here with a new showcasing of Red Hood in the game. He is definitely the more aggressive of the group with his hand-to-hand styles and guns, but WB Games Montréal is set up to make it all work. That and to make Gotham Knights all forms of exciting for us as October 25th is coming up on us all with a quickness. Just to give us all something more to dive into on the PS5, Xbox Series X|S, and PC. As if they have not done a great job on this already with everything that they have given to the world thus far. Now, Red Hood is just ready to blow us all away.

As you can see in the following video for Gotham Knights, Jason is out there again with his firearms to bring the pain to crime in Gotham. It looks like there is some of the mystical imbuement to them all so they are not fully lethal out there. This also builds into how Mr. Todd will be moving about the world too. Mystical platforms and boost will show up when he needs to get further into the world of Gotham Knights. This was the one that I was more curious about given how the others always felt like they had traversal built in already. Have a gander at the following video to see how it will truly function when it drops on us all.

Red Hood’s purpose is clear: protect Gotham at all costs.

Resurrection may have changed him, but one thing is still true, Gotham City needs Red Hood. He’ll do whatever it takes to save his city. What’s the worst that could happen? He's already been to hell and back, and he’d do it again.

The video features all-new gameplay and custom cutscenes of Red Hood, also known as Jason Todd. An intense vigilante with a short fuse, Red Hood is a highly trained marksman and hard-hitting, a hand-to-hand fighter who's reached the peak of human strength, making him an expert in both ranged and melee combat. After his violent death and subsequent resurrection in the Lazarus Pit, Red Hood gained the ability to harness mystical powers that aid him in battle and allow him to propel his body through the air to traverse the city. Despite his complicated past, Red Hood has reconciled with the Batman Family and is committed to using non-lethal combat methods to protect Gotham City in the wake of Batman's death.

Is this about how you thought Red Hood was going to function in Gotham Knights or did you think they were going to nerf it differently? How lethal do you think he will be in the game or will they have shifted over to non-lethal bullets for the character? What other aspects of the Lazarus Pits will there be in the game or will this be the only showing of it all? Feel free to let us all know down in the comments and then feel free to discuss it all. We will keep everything for Gotham Knights flowing out there, so be sure to keep a close eye on the site for all of that. I am sure you will enjoy all of it moving forward.