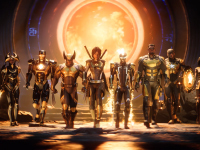 It feels like the hype train for Marvel’s Midnight Suns was hitting a stride here in the past few weeks with all of the new character reveals and showcases. They all may not have been what we were hoping to get along the way, but it was still going. Sadly, it seems like some of that steam is going to be let out with Firaxis Games now announcing that Marvel’s Midnight Suns has been delayed once more. You will need to find something else to play on the PS4, PS5, Xbox One, Xbox Series X|S, Switch, and/or PC on October 7th now, as it is no longer going to be landing on this date. Sad news indeed.

As it all turns out, Marvel’s Midnight Suns was not fully up to what the team wanted to give us all and they have made the choice to delay it further. All with no date given as of now. Only that we will eventually get to see the Midnight Suns take on all of the evil out there before the end of the fiscal year here. That could mean that we might see the game before the end of the year, but it also means that it could be all the way out to March 31st of 2023 before we get to experience it all. That does give more time to build up that hype again but it is surely a hard blow for all of us that were looking forward to a nice Halloween game.

Is it a bit of a shock that Marvel’s Midnight Suns is delayed again or did you always think it was going to happen? Do you think this is due to the game just not being ready or is there another reason behind this delay? How long do you think we are going to have to wait to get to experience it all and will it be well before we get deep into 2023 now? Let the world know what you are thinking down in the comments and then feel free to discuss it all if you so wish. More for Marvel’s Midnight Suns should be coming to keep the ball rolling. We will do our best to get it out to you as best we can, so just keep checking in for the next big update.