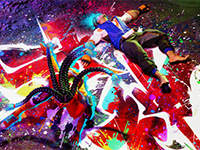 The roster keeps expanding for Street Fighter 6 as we have another blast from the past coming back and a new fighter getting tossed into the mix. All of which looks to be how Capcom is going at it for this one as we wait for the 2023 launch of the title. All of which is something I am down for so we can keep the line for Street Fighter feeling new and expanding instead of the same fighters over and over again. Sure, we have Juricoming back now but we also have a look at Kimberly and the fresh new take on things that will provide. As long as you can look past the button mashing that your average gamer will go with when playing the game.

As you will be able to see below, Kimberly is here to bring a bit more of the ninja life to Street Fighter 6 with a bit of a twist. Kimberly's love of the '80s pop culture and hip-hop style is mixed into everything performed. Also, a bit of spray paint seems to go a long way and is not something that would normally be condoned in these kinds of fights. then again, the way Juri is back with the same style but in a new way from the past Street Fighter titles, I think rules are always left up to interpretation. They all seem over the top and something that will allow for some insane combos along the way. As long as it is as easy to pull them all off in the game as this video makes it seem. My guess is that it will only be this way for the competitions and the rest of us will luck out to look as cool as they do here.

Kimberly, the spunky new ninja, and Juri, the sadistic thrill-seeker, join the Street Fighter 6 roster! Kimberly utilizes traditional ninja techniques with an urban twist complete with spray cans and her trusty portable cassette player. Juri returns as wicked as ever, riding in with a familiar yet altered moveset for fans and newcomers alike. Play Kimberly and Juri when Street Fighter 6 hits the streets in 2023.

The two newest Street Fighter 6 characters are sure to deliver a knockout. Kimberly blends together her skills as a ninja with her love for ‘80s pop culture to create a riveting, yet dangerous fighting style. Juri returns as a wicked force and has added a few new tricks to her move set so she can relish in her opponents’ suffering. Kimberly and Juri join Ryu, Chun-Li, Luke, Jamie, and Guile on our roster of announced characters.

Do you have any new thoughts on the roster for Street Fighter 6 or does it feel like it is filling out nicely for you? How involved do you think the non-traditional aspects will be or will we see more of a "No Rules" style come up? Could this one allow for your button-mashing friends to have a chance in the game or will it still only look this impressive in the hands of the professionals? Go ahead and give us all of your thoughts on this down in the comments. More for Street Fighter 6 will certainly be coming, so keep checking back on the site for all of those updates and more as we get closer to launch.