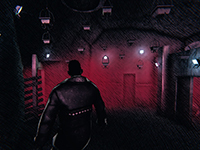 It has been a bit of a mystery as to what will be going on in Saturnalia beyond the basics of a weird town and a terrible monster hunting us all down out there. All of that and with an interesting art style that Santa Ragione has gone with to keep it fresh and the horrors a bit more obfuscated out there. Now, though, we have a look at the true way that Saturnalia is going to play once it hits the PC. It is not going to be just a basic rogue-lite title even if it is going to have some serious elements from those that we have enjoyed in the past. As long as you like managing many different characters instead of just one along the tale we will be uncovered along the way.

All of the basics are here for Saturnalia with the lack of HUD elements that will guide us around, item collection and use, and an in-game way of keeping notes that could be a bit more convoluted out there. The bigger twist is that when the character we are controlling is taken down, we are shunted over to another and can save the previous or any others that have died. The time that the rogue-lite kicks in for Saturnalia is if all of the characters are killed. If that happens, the whole world is generated anew and we will have to explore it all again while keeping the story going. It should be an interesting mechanic to play around with for sure.

Santa Ragione has unveiled a new trailer for its upcoming title Saturnalia, a single-player horror-rogue-lite set in the Italian region of Sardinia, circa 1989. The previously-unseen narrated footage showcases the game’s setting, story, and gameplay elements, including an introduction to the fictional town of Gravoi and an explanation of the game’s mechanics.

A PC game set to exclusively debut on the Epic Games Store — with more platforms to be announced in the future — Saturnalia is a fever dream inspired in equal parts by authentic Sardinian culture and classic Italian Giallo horror films. The narrative revolves around a mysterious, centuries-old ritual that occurs every year on the night of the winter solstice, as each of the game’s four playable characters must utilize their unique abilities and confront their own painful memories in order to expose the secrets haunting the town and ultimately escape Gravoi.

Some of its most notable features include:

Is this how you were expecting to see Saturnalia play out or did you think it was going to be a basic rogue-lite instead? How many characters do you think we will have to play as and will they all share the same memory map to help us navigate better? Does this make it so that we never have to worry about changing the map if we are good at evading everything? Tell us all of your thoughts on this down in the comments and then feel free to discuss it all if you so wish. More for Saturnalia is on the way as we get closer to launch. Just be sure to keep checking in for all of that and much, much more as time marches on.