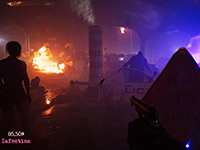 The next title in the Outbreak series is revealed with Outbreak: Shades Of Horror coming to us all soon

The horror of the Outbreak series is looking like it is going to continue with the latest reveal that Dead Drop Studios has for us all now. A new addition to the IP that is slated to head to the PS5, Xbox Series X|S, and PC along the way to give us more survivors to play as and areas to escape. All with a nice and dark world that is filled with all forms of horrors during the early stage of a zombie apocalypse. Get ready for Outbreak: Shades Of Horror to shock and awe once it lands and keeps all of it flowing just a bit more. If you are looking for one more horror multiplayer title to add to the growing library out there.

If you have missed out on this IP for a while, Outbreak: Shades Of Horror will be using some of the same gameplay from titles like Resident Evil: Outbreak. A gameplay loop where we will take on the role of one of eight survivors trying to escape Cypress Ridge shortly after the shit has hit the fan. There will be various horrors hidden about along with journals and recordings to help expand the lore of the game and universe so we can get the full story before the world fully falls. You can have a look at the latest teaser we have, and if it looks like it is going to be your jam, Outbreak: Shades Of Horror will have a Kickstarter kicking off at the end of August so you can help fund and secure your spot in this new horror-filled world.

Outbreak: Shades Of Horror is a love letter to the thought-provoking, mind-bending video games of the golden age of survival horror in the late 1990s and early 2000s. Towards the end of this era, there was an emphasis on stories driven by multiple characters with multiplayer co-op — and it’s this spirit that Dead Drop Studios aims to capture in their new title.

Inspired by the likes of Resident Evil: Outbreak, Shades Of Horror will see players control one of eight survivors as they fight to escape the city of Cypress Ridge during the early days of the zombie apocalypse. Fans of the earlier Outbreak games will be excited to see two favorites, Lydia and Hank, as their origins are revealed.

Each survivor will have a unique backstory and skillset that provides players with new ways to explore their environment. Players will need to complete the game multiple times — piecing together journal entries, recordings, and radio station broadcasts scattered throughout the city — to gain a full understanding of the multifaceted story. The goal is not to save the day — just to get out in one piece!

Have you been playing through the Outbreak line before now and wanted to see where it is all going? Do you think these kinds of games will live on seeing as the AAA developers do not seem to be able to capitalize on it as well as some of the indies out there? Are you looking to get the whole series in one spot now and will that be an offer when the Kickstarter starts up? Tell us all of your thoughts on this down in the comments and then feel free to discuss it all. When we have more for Outbreak: Shades Of Horror, we will try to share it all here for you. Please keep checking back in for all of that and much, much more as we head into the future.