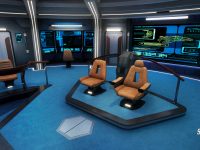 It has been a bit of time since Star Trek: Resurgence was revealed to the world and showed that we could hold out hope to take command of a different vessel in the setting's universe. Not too much was revealed at that time, but it looks like that was for good reason with Dramatic Labs working hard to make sure the team's interactive storytelling pedigree was put to good use. That is why it was a solid treat to see some live gameplay for Star Trek: Resurgence out at SDCC this year, as well as getting to sit down with two of the game's writers Dan Martin and Andrew Grant. All so we can travel deeper into the game than just the basics we can see in the videos.

Given that the development team behind Star Trek: Resurgence mostly comes from those great minds over at Telltale games, right from the start we all should know it is going to be a chose your own adventure style game with a solid story and a little action mixed in. The footage and gameplay we were able to see during the panel out at the convention highlighted mostly on the side of choice and consequence even if there will be a bit more action mixed in than just walking and basic interaction. They were holding most of that off for a later time while the audience helped walk through some of the mission briefings and defense on some of the actions we took during this part of Star Trek: Resurgence.

It was a little odd to dive deep into it all since it was part of the story pulled out of the main narrative with no true context given for the actions that happened beforehand. This was obviously done to keep spoilers to a minimum for fans that want to go into the game blind. Also to keep things flowing since the game build was in an early form and the team aimed to show off more of the lore form Star Trek that was to build upon in this game. You can get a taste of some of this in the following video so you do not have to read a full recap of how the audience took a more defiant role than most would have wanted in the setting of the universe.

Spock briefs the captain on what to expect and the best course of action to help drive some of the choices along in Star Trek: Resurgence.

Star Trek: Resurgence is an interactive narrative video game that tells an original story set in the era shortly after the events of Star Trek: The Next Generation. Stationed aboard the U.S.S. RESOLUTE, players will assume the role of two principal characters, First Officer Jara Rydek and Engineering Crewperson Carter Diaz, as they unravel a sinister mystery involving two alien civilizations on the brink of war. Throughout the game, players will immerse themselves in the Star Trek universe, interacting with new and returning characters through a variety of dialogue and action gameplay to determine the course of the story.

From here, I was able to speak to two of the writers for Star Trek: Resurgence to pick their brains a bit more on the story elements to expect and what we could expect when the game launches. For starters, this all takes place shortly after Star Trek: The Next Generation and will have many elements from Star Trek: Lower Decks and Strange New Worlds mixed in. Not because this is a tie-in title, but the team started working on this story and Star Trek: Resurgence before those shows were even revealed to the public. An interesting aspect that they had to navigate since it is rare that all of the various production studios would be willing to share information well before to help inform others.

Aside from that, it looks as if we will be seeing two different sides to the Star Trek universe when it comes to the crew in this game. Obviously one with the higher command with First Officer Jara Rydek and the other side diving into the Lower Decks crew with Engineering Crewperson Carter Diaz. Just with a bit more of a serious tone than the show normally offers up. As it all stands, it sounds like Carter's side of the story will be more of the action-oriented parts with Jara focusing more on the choices and how to have the perfect balance to not get court-marshaled out of position. Not that we think that will be an option we will be able to go down in the game after all.

Explore a bit more of the U.S.S. Resolute with Jara as they get ready to boldly go out there in Star Trek: Resurgence.

Speaking of choice and the options we can go down in Star Trek: Resurgence, the duo was rather sparse on offering up how many variations of the story we will get to experience in the game. Things like if there would be multiple endings or if the story was written to allow for some drastically different events to play out in the game. This could all be due to the fact that Star Trek: Resurgence is still in development or that they still have to work in the confines of the universe they are writing in. Given when it all takes place, we cannot go around killing off iconic characters or causing all kinds of strife out there that would make no sense in the grander scheme of things. More so, since they always wanted to write a story in this time and place and not build something fans of the IP have never seen or thought about before.

Which, if you have been following along so far, does mean that this will allow Star Trek: Resurgence to bring back many of the classic characters from the universe or show what they were up to during the timeline we are on. We have seen Spock show up in all of the trailers and videos thus far, so it is established that is going to happen. There was not any solid word on who else from Star Trek's history will show up or at least be name-dropped, but they did mention that it is all on the table. I think it was probably hard enough to nail the look and feel of Leonard Nimoy's character already, that they will most likely boil down to a few minor cameos or voices from the living cast with names popping up on screen for others. I guess we will have to wait, see, and be surprised.

Check out one of the other playable characters in Star Trek: Resurgence as Carter takes on a new assignment for the mission.

Are you excited to see how this will build into the Star Trek universe or will it end up being its own thing out there instead? Given that they are diving into the Strange New Worlds and Lower Decks side of it all, we will get to see or hear any of those characters too? Will we be able to see some different endings out there or will they end up being the same thing but with different characters around based on the choices? Go ahead and let us all know down in the comments what you are thinking and then discuss it all. When we have anything more to share for Star Trek: Resurgence, we will share it all here for you. Please keep checking back in for all of that and much, much more.