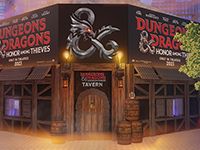 We brought it up just before SDCC that there was going to be a full tavern built to help promote the upcoming Dungeons & Dragons: Honor Among Thieves film. All of that but also to give us all a bit of a taste of how the game is brought to life instead of just the theater of the mind that we have been going with for decades now. If you have played Dungeons & Dragons at all, I am sure you have had moments where you have been in some form of tavern or inn to help plan and recruit your party. There is a reason it is a trope for the game and we had a chance to walk around and enjoy some of the drinks out there at SDCC. If you did not get a chance to experience it, let us break it all down for you and show you what you might have missed.

Right from the start of the event, we were shuffled on through a hall of monsters toward the tavern. A hall that was filled with various sand sculptures of Dungeons & Dragons monsters held in place. Mimics and Displacer Beasts were on full display to help get the hype up before entering into the main hall for drinks and entertainment. It would have been nicer, for me at least, to have a lot more to wander through for these monsters and to see a few others, but I understand that the team that put this all on needed to get as many bodies through. Especially since the next part of our Dungeons & Dragons experience easily could have gone on much longer if there was not a system to move participants through swiftly. From this hall, we were all shuffled into the main tavern experience and handed a glass tankard with our chosen drink. Mainly just alcoholic and non-alcoholic based on the wristband given before heading in. This is where the total immersion started to kick off with various actors and events going on around the tavern to help fill out the world. We had bards and rogues wandering around to sing songs, lead cheers, and try to pull everyone into various quests in the world. There was quite a bit going on that it was easy to get sucked in and miss other parts of the whole experience. You can see that in the video below. There were whole sections our party missed due to the crowd as well as how fast we were shuffled through. I only know this as I was allowed to wander around just a bit more as the room was being cleared. For instance, many did not even get to see the Gelatinous Cube photo booth in the back or some of the various other creatures around the tavern.

All of that aside, the celebrating was soon cut short for the main Dungeons & Dragons: Honor Among Thieves event that was set up. A fully immersive Black Dragon attack on the tavern that used a mixture of practical and digital elements to bring the whole production to life. The dragon flies in on-screen, leaves to wander "the roof" and making the ceiling creek and chandeliers sway, only to come back and breathe its acid breath on the tavern. All of which was something to behold and then look around at the aftermath for those observant enough to see. I am talking about random "acid" dripping down the various elements in the tavern. Yet another thing that I know many missed out on with the first viewing due to being forced out quickly to allow for the next wave of guests. Have a look at it all just a bit down to get a better view of the various elements I have been talking about.

We were able to get into the world of Dungeons & Dragons a bit further at SDCC 2022. An immersive experience that had us wander the hall of monsters, have a brew in the tavern, meet a few of the bards in the area, and then survive an attack from a Black Dragon. Have a look at the various scenes we had out during this experience.

Who needs heroes when you have thieves? Watch the NEW trailer for Dungeons & Dragons: Honor Among Thieves and get ready to see it in theatres in March 2023.

A charming thief and a band of unlikely adventurers undertake an epic heist to retrieve a lost relic, but things go dangerously awry when they run afoul of the wrong people. Dungeons & Dragons: Honor Among Thieves brings the rich world and playful spirit of the legendary roleplaying game to the big screen in a hilarious and action-packed adventure.

At the end of the day, the Dungeons & Dragons: Honor Among Thieves was a fun little experience to have but mostly felt like it could have been a bit longer to truly get participants involved. It did a great job in immersing the crowd into the world that is being built, but by the time we all got into it all, it was time to head back out into reality and thus it mostly did not stick around in my head longer than the walk back to the hotel. This is not a slight on the teams of people that put it all together, as I know they had an insanely high volume of participants to get through. They did have a reported five-hour stand-by line multiple times after all. It just felt over well before it began and it was hard to follow along with any of the other Dungeons & Dragons elements that the cast and crew were trying to mix in. Outside of the fact that there is going to be a huge Black Dragon spitting acid everywhere. Did you get a chance to check out the Dungeons & Dragons: Honor Among Thieves tavern out at SDCC or did the massive lines drive you away? Was your experience different than ours or does the video show how the twenty-minute event was packed into a little under six minutes to enjoy? Does this all get you further hyped up for the film or want to sit down and play the tabletop game instead with your own tavern at home? Let the world know and feel free to discuss it all with us down in the comments. We are going to try to cover more for Dungeons & Dragons: Honor Among Thieves as we get closer to the film's release. It will be mixed in with all of the core gaming news, so be sure to keep your perception ranks maxed out so you do not miss any of it.