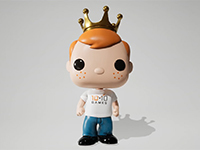 I am sure that by now most out there have heard of or are aware of Funko before now. That would be the company out there that makes all of those fun vinyl Pop! figures among many other nerd/geek culture collectibles out there. They have also dipped a bit of their toes in the past with some video games, but during SDCC this year, they let loose that they are teaming up to bring a full AAA title to the gaming community with the help of 10:10 Games. Not just in the way it has been before where other teams have made something in their universe while just using the Pop! figure style that Funko has brought to the market out there for so long. It is time to see a whole new kind of gamer join in.

Sadly, there is nothing more to truly talk about for this other than Funko is looking to do this. It is stated to be an action platforming title for the PC, PS5, and Xbox Series X|S when it does come. It will also not just be another IP with the Funko branding and style slapped on it. This title is slated to be something truly new from both companies but will certainly keep the look and feel that Funko has put out there for a while now. We will just have to sit still and wait, just like the toys and figures that they give us out there. I am just hoping that it will not boil down to a new way to promote their toys instead of being something truly fun.

Funko, leading pop culture and lifestyle brand, announced its plans to enter the multi-billion dollar video game market during the company’s Hall H-Pop! Talk panel on the final day of San Diego Comic-Con. Through Funko’s collaboration with developer 10:10 Games, the companies’ first co-production will be a AAA Action Platformer in 2023. Led by video game developer and five-time BAFTA award winner Jon Burton, 10:10 Games has gathered some of the industry’s best creators to develop it.

Funko and 10:10 Games will focus on developing AAA content for current and next-gen consoles and PC with the still-untitled release. At the panel, the executive team shared that this first game, in addition to being an action platformer, will have major third-party studio integration and is expected to have a “T” for teen rating.

Did you ever expect Funko to get fully into the video game market or was it something that was always going to happen over time? Do you think it will lean into something truly new for gaming or will it be close to the other things we have seen but specifically what they want to put out? Would you want to play a game where you just have your Pop! figures running around or would that be too basic? Tell us all of your thoughts on this down in the comments and then let the discussion flow. More is on the way from Funko and we will share all that we can. Please keep checking back for all of that and everything else that is on the way.