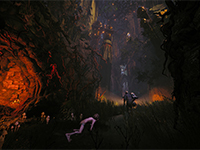 A new delay is set down for The Lord Of The Rings: Gollum so we will need to wait a bit longer to see what Gollum is up to

Well, this is a bit of a shock, as The Lord Of The Rings: Gollum is now delayed just a short time after getting an official release date set for the game. Just a few weeks ago, Daedalic Entertainment let the world know that the PS4, PS5, Xbox One, Xbox Series X|S, and PC on September 1st and now we are back to let you know that it will be a bit longer. A few more months long at that. So the wait is back on to see just how Gollum's story played out in the sections of the story no one has yet to hear or read about. This could have also been part of the release of The Rings Of Power show, but that is just a bit of speculation on my end and with the team not wanting to lose out to the new show.

The reasons we do have for the new delay of The Lord Of The Rings: Gollum is about as much as we normally get. The team wants to make sure they give us the best version of the title and needed more time to do so. It is just harsh to see it so close to the release date announcement that it is a hard one to swallow here. Not that other titles have not done this in the past, but usually, the developers and publishers wait until things are completely solid to announce a timeline that is so close. No matter the case, I am always willing to wait long to get a great game and this one will have so much going for it now for Gollum after the upcoming show concludes. That is about when I expect us to see the official launch of it.

The Lord Of The Rings: Gollum — Gameplay

Did you have a feeling that you were going to have to wait longer for Gollum or did you expect it on September 1th given how recent the announcement was? Do you think this could be due to the release of the show coming the day after it was supposed to launch or is it to iron out some other bugs that have popped up? How likely do you think the new release will be about when the show wraps up or could it be pushed until next year at the earliest? Tell us all of your thoughts on this down in the comments and then feel free to discuss it all as you so wish. More for The Lord Of The Rings: Gollum will be here, so keep checking back for all of that and much, much more.