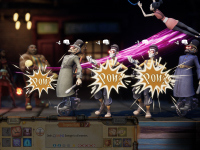 The teasing is almost over and we know when we will be able to take the streets with the Circus Electrique on the PS4, PS5, Xbox One, Xbox Series X|S, Switch, and PC. If you have been missing out on this one so far, it is a new RPG title from Zen Studios that is a mix of story and tactical title in the mix. All with a steampunk art style to help give Circus Electrique some extra life to keep all of our eyes on it. Now, we know that the title is landing on all of those listed platforms on September 6th, 2022. Not that long of a wait indeed.

On top of the new date we have for Circus Electrique, we have a new trailer to show off more of the madness our teams will have to fight out there. The story does still show that the general populace is still going mad and the only ones that can stop them are our performers out there. Even if that does mean that the Circus Electrique does need to go on and we need to manage all of that still while sending out our heroes. It is nice to see some of the animals will be used in the mix too with all of the various performers we have seen up to now. After all of this, though, I do not think I can truly wait to get my hands on the game in the coming month.

Circus Electrique is arriving on September 6, 2022! Prepare yourself for a📖 story-driven RPG that's part ⚔️ tactics and part 🎪 circus management with a 🎩 steampunk twist!

Circus Electrique is part story-driven RPG, part tactics, part circus management, and completely enthralling – all with a steampunk twist. When everyday Londoners mysteriously turn into vicious killers, it’s up to the circus’ lineup of Strongmen, Fire Blowers, Clowns, and other performers to save the city in tactical turn-based 4v4 battles. With 15 playable classes in total, each with their own eccentric skill-sets, you’ll need to carefully assemble your motley crew in order to save the city.

Are you excited to see that Circus Electrique is just over a month away from now or did you think you were going to have to wait a lot longer? How many different animals do you think we will get to see in the mix of these fights or will they be limited and only set for the handlers? Why do you think the team will still keep the show going in the world and will it be something more than just using the iconic phrase that is always used? Give us all of your thoughts and feelings about this down in the comments and then feel free to discuss it all. We will keep more of the news around Circus Electrique flowing out there to you, so be sure to keep checking back here for all of that.