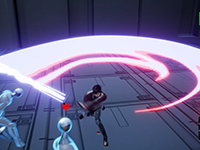 It looks like the Switch is not going to be the only platform out there that will be seeing No More Heroes 3 out there. It has been dominating the system for a while now, but Grasshopper Manufacture wants to make sure the rest of the community has a chance to experience it all. That is why on October 11th the PS4, PS5, Xbox One, Xbox Series X|S, and PC will be getting their own versions of No More Heroes 3 out there. Now if we could only get even more titles out there to do the same thing over time.

This version of No More Heroes 3 will bring us all the higher-end visuals and framerates that these systems are known for. Along with that, there will be the faster load times too, but no word on if there will be any of the DualSense extras that normally come with the PS5 releases. The Xbox One and Xbox Series X|S will be given to us with the Smart Delivery system too. All in all, it is just going to be a few more ways to play No More Heroes 3, even if some of the in-game branding seems to be carrying over the way the following trailer makes it feel here.

No More Heroes 3 will arrive on new platforms on October 11 with improved HD visuals and framerates, along with faster loading times to keep players dishing out eye-popping ultraviolence.

Being the number-one assassin in the world isn’t what it used to be. Otaku hero Travis Touchdown is back once more, forced out of retirement to defend Santa Destroy–and Earth–in an intergalactic test of might while proving he’s more than just a has-been who talks to his cat. Warm up those beam katanas, tighten the all-new Death Glove, and get ready to partake in outrageous boss battles against the evil Prince FU and his nine alien henchmen as Travis fights his way to the top of the Galactic Superhero Rankings!

No More Heroes 3 will release on October 11 for the PS4, PS5, and Windows PC via Steam and the Microsoft Windows Store, and will be supported with Smart Delivery on the Xbox One and Xbox Series X|S.

Have you been hoping to see No More Heroes 3 make it to these new platforms or did you already come to terms before now? What new features do you think we will see in the mix here or will it all be the basic stuff as usual? What other titles would you like to see get this treatment and is it too much to hope for that we get rid of the third-party exclusives? Tell us all down in the comments what you are thinking and then feel free to discuss it all. More for No More Heroes 3 should be on the way, so keep a close eye here for all of that and more.