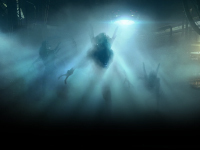 The Aliens franchise is coming right back at once more with a new action-horror title in the works from Survios. A new title that will be on the PC and consoles along with a VR option to get us deeper into the horror that will be made for us. The first true VR version of the Aliens IP that will most likely scare off so many if it is all done correctly. Given that the team has made the Creed titles and The Walking Dead Onslaught too. Maybe that may not sell you on it out the gate, but SDCC will have the official and full reveal for us out there, if you are able to make it.

That all said, we do not have much else to give out there for this Aliens title beyond that, and that is because there is not much more than the following artwork and basics for it all. This will be an original story in the Aliens universe so there is not even a bit of the story we can try to figure out beyond there being a Xenomorph and us trying to survive the horrors of it all. Given how Isolation scared everyone out there with just the FPS aspect, I can see them building on that to give everyone out there the darkest and scariest of nightmares after playing. As long as they do not try to go down the paths of the other titles from the IP we have had over the years.

Survios, a multi-platform game development studio and publisher, today announced a new collaboration with 20th Century Games to develop an intense single-player, action-horror game set in the iconic Alien universe and built for PC, console, and VR. More details on the upcoming Aliens game will be revealed at the ALIEN: Expanding a Dark and Frightening Universe panel at San Diego Comic-Con on July 21, 2022 from 2:00PM - 3:00PM, in Room 28DE.

Survios is embarking on a new collaboration with 20th Century Games to develop an intense single-player, action horror game set in the iconic Alien universe.

This new Aliens game will feature an original storyline, set between the Alien and Aliens ﬁlms, where a battle hardened veteran has a vendetta against the Xenomorphs.

The game will take full advantage of Survios’ expertise in creating immersive and authentic gaming experiences, and is being developed for the PC, Console, and VR.

Have you been raring for a new title in the Aliens line or did we hit the highpoint with Isolation already? Will they try to mix in any of the previous story and characters or will they truly go completely new out there to keep fans on their toes? Will you be brave enough to go into the VR version of it all or will you stick to the base version to save your sanity? Tell us all down in the comments your thoughts and then feel free to discuss. We will be keeping an eye on this and seeing what is announced for this Aliens title during SDCC. Be sure to keep checking back in for all of that and much, much more.