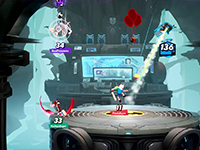 Just as we assumed it would be, it looks like the Open Beta for MultiVersus will indeed be kicking off just after this year's SDCC. All of which makes sense with what Player First Games and Warner Bros. Games are bringing out there this year. Not only that, but after getting a massive crowd all hyped up for MultiVersus, what better way to get them hooked than by letting them get in on the Beta Test. More so, those that are not going to make it out there but were part of the Closed Beta will get to dive back in on July 19th. Everyone else will have to wait to add it to their PS4, PS5, Xbox One, Xbox Series X|S, and PC on July 26th. Not a massive wait, but something to help pass the time if you cannot be at all of the showings during SDCC.

To add to all of that, it looks like all of the progress that will be made in MultiVersus during this Open Beta will carry over into the main game no matter when you join in. A nice little extra head start for some out there so they can start to grind out more characters and levels once the full version is out there. Given that we now know that the Iron Giant will be joining the roster of MultiVersus, you will want to make sure that when that happens you are not going to be bogged down with your Arya Stark or Batman characters that need to be improved. As long as Iron Giant coming is not part of the way they will be making money off this Free To Play title after it launches. For now, though, it sounds like it will be part of the main roster and the rest will just expand along the way.

Warner Bros. Games announced that the MultiVersus Open Beta will begin on July 26, available for PlayStation 5 and PlayStation 4 consoles, Xbox Series X|S, Xbox One consoles, and PC with full cross-play support and dedicated server-based rollback netcode for robust online competition. The free-to-play platform fighter in development by Player First Games will also have an Early Access period beginning July 19, which will be an opportunity to experience the MultiVersus Open Beta before the release. Early Access will be available to anyone who participated in the MultiVersus Closed Alpha, as well as those who earn a code via Twitch Drops.

Additionally, this includes the first look at Iron Giant (The Iron Giant) who will be playable beginning July 19. Iron Giant is one of 16 characters that will be featured, alongside Batman, Superman, Wonder Woman, and Harley Quinn (DC); Shaggy and Velma (Scooby-Doo); Bugs Bunny and Tasmanian Devil a.k.a. Taz (Looney Tunes); Arya Stark (Game of Thrones); Tom & Jerry (Tom and Jerry); Jake the Dog and Finn the Human (Adventure Time); Steven Universe and Garnet (Steven Universe); an extraordinary original creature named Reindog.

Open Beta and Early Access will also include eight different maps, such as the Batcave (DC), Tree Fort (Adventure Time), and Scooby’s Haunted Mansion (Scooby-Doo), along with a variety of ways to experience the game including the 2 vs. 2 team-based cooperative mode, 1 vs. 1 matches, 4-player free-for-all, co-op vs. A.I. matches, custom online lobbies, The Lab (practice mode), tutorials, and the addition of local play matches supporting up to four competitors.

Did you also assume that we would be seeing the MultiVersus Open Beta around this time or did you think it was going to be on the last day of July? Will you be able to get in on the 19th or will you have to wait until the 26th? Do you like that Iron Giant is coming in here or were you hoping to see a different character announced at this point? Tell us what you are thinking down in the comments and then discuss it all as you so wish. When we get anything more to offer up for MultiVersus, know we will share it all here. Please keep checking back in for all of that and much, much more.