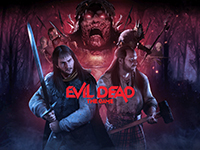 The latest update for Evil Dead: The Game is finally here and it is bringing so many more Evil Dead elements in

The day is finally here for Evil Dead: The Game fans with the biggest update to come to the game since launch. The Army Of Darkness update is finally here from Boss Team Games and will be bringing us all forms of goodies that we have had teased thus far. Goodies like the Castle Kandar map that we have had a whole lot of art for, a new mace, some new skins, and so many more Deadites to slay out there in the world. Nothing new in terms of fighting and abilities, but skins and new hiding places for the demon to place them. No Evil Dead fan will be able to scoff at all of this. Most of it is free if you already have the game, with a bit more coming in for the Season Pass holders too. Such an exciting day, indeed.

All of this new content is amazing and it is interesting to see that we are getting vehicles shunted through time in Evil Dead: The Game now, but there is one more mode that is hidden under all of this that we have now too. That is the new Exploration Mode we can fire up in the game if we so chose to. The teams have put in so much time and effort into rebuilding the Evil Dead world and locations, that most of us do not get to experience in the heat of things. That is where this mode comes in and it will let us all wander the maps a bit without much of a threat out there. It does sound like we will have random Deadites pop up that we have to deal with, but nothing as intense as the matches. This way we can find all of the fun Easter Eggs out there and start to memorize the maps just a bit more too. This might not go so well now that I am typing it all out…

Saber Interactive and Boss Team Games, in collaboration with Metro Goldwyn Mayer, have released the “Army of Darkness” update for their co-op PvP|PvE multiplayer action title Evil Dead: The Game. This major content update introduces a new map featuring Castle Kandar, the setting of the classic MGM film Army of Darkness, as well as two new weapons, new premium cosmetics, and a new single-player Exploration mode. The new map, weapons, and mode are free for all owners of Evil Dead: The Game. The update is available now for players on PlayStation 5, Xbox Series X|S, PlayStation 4, Xbox One, and PC via the Epic Games Store.

Evil Dead fans will recognize numerous locations on the Army of Darkness map, most notably Castle Kandar itself, recreated in vivid detail. Other locales include the iconic Windmill, the Arthurian Outpost, Fort Gort, and the Castle Kandar Keep, which held the Necronomicon during the attempted siege by the army of darkness. In addition to the free map, players will also be able to fight with two new, free weapons: the Mace, a slow but powerful close-range weapon perfect for going medieval on deadites; and the Explosive Crossbow, slow to reload but with a blast worth the wait.

In the new Exploration mode, players will be able to experience Castle Kandar as well as the other maps in the game entirely on their own. Free roam across all the vast locations and learn the lay of the land while honing your slaying skills against roving Deadites.

Players can also purchase two new Ash outfits from Army of Darkness: the Ash Williams S-Mart Employee Outfit and the Ash Williams Gallant Knight Outfit. The Medieval Bundle is available as well, featuring new outfits for Lord Arthur and Henry the Red, along with a gold getup for Evil Ash and his minions.

Are you glad to see this little corner of the Evil Dead universe finally get a massive set piece in the game or did you want a different part to get the highlight? Do you like the new mace and the exploding crossbow weapons or will they still feel like the others but with new animations? What do you think will be the next big addition to the game and will we see the 2013 film or the upcoming film show up at all along the way? Tell us what is on your mind about all of this down in the comments and then feel free to discuss it all as you so wish. If we have more to share for Evil Dead: The Game, know that we will share it all here for you. Please keep checking back in for all of that and everything else we will have along the way.