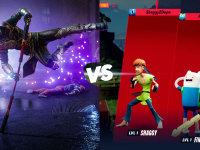 Get ready to dive into more Warner Bros. Games with two of their bigger titles getting a showcase during Warner Bros’ SDCC 2022 run

We are finally in the full ramp-up to SDCC 2022 and so many are able to actually show up to in-person conventions again and it looks like Warner Bros. Games is going to take full advantage of this with the lack of in-person gaming conventions so far this year. It is one of the best ways to get general audiences out there all of the new looks, feels, and information for them to all figure out if they want the game or just to get excited for them. This time around, Warner Bros. Games will be offering up a solid new look at Gotham Knights and MultVersus to take in. Given that one will be hitting an open beta on the PS5, Xbox Series X|S, and PC this month and the other fully launching in October, it definitely makes the best sense to do all of this. Even if it is only sounding like panels at this point. Usually, this does mean there should be playable demos somewhere on the show floor, but for now, it is just some video presentations with the developers and voice casts to help get that hype train into full steam.

Now that we know they are all coming, just what will Warner Bros. Games have for the fans out there? When it comes to Gotham Knights, it sounds as if the Warner Bros. Games Montréal team will be talking about the RPG elements of the game and the open-world parts we will get to run around in. It is possible we could see one of the other Knights shown off, but with Robin getting dropped recently and so much time before the launch, it could just be some of the basic gameplay. If anything, we will have various members of the development team and the voices of Batgirl and Nightwing on the panel too. This could mean we are going to get a new look at Batgirl too, but this is most of what we have now. Just be sure to keep an eye out for the panel date and time if you are going to be out at SDCC this year.

Moving over to MultiVersus, the Player First Games team will be out there to dive further into the behind-the-scenes of the game and how the game has been developed up to now. There could be a few more of the fighters announced and shown off during the panel too, as this is the MO from Warner Bros. in the past when they showed up to SDCC. If anything, they should also dig into the various Warner Bros. characters we have announced so far and what the open beta will give fans. For those looking to get in on some of the voices, though, Mathew Lillard and Tara Strong will also be on the panel to dive into Shaggy and Harley Quinn respectively. The time and date for this panel are yet to be set, but I would venture that will also be the day that the beta opens if not the Monday after SDCC to make sure all of the fans can get in on the game once they get home.

Making A Mash-Up: MultiVersus — Get a behind-the-scenes look at MultiVersus, the all-new free-to-play platform fighter videogame featuring an ever-expanding cast of beloved heroes and personalities, from Batman, Superman, Wonder Woman and Harley Quinn (DC) to Shaggy (Scooby-Doo), Bugs Bunny (Looney Tunes), Arya Stark (Game of Thrones) and many others. MultiVersus introduces a team-based 2 vs. 2 format with fun-filled multiplayer bouts set against the backdrop of various reimagined environments from the characters’ legendary worlds, including Batman’s Batcave (DC), Jake and Finn’s Tree Fort (Adventure Time), Scooby’s Haunted Mansion (Scooby-Doo) and much more. See and hear new details about the game from panelists Tony Huynh, the Co-Founder of Player First Games and Game Director for MultiVersus, and Sheloman Byrd, Executive Producer, Warner Bros. Games, along with MultiVersus actors Matthew Lillard (Scooby-Doo), the voice of Shaggy, and Tara Strong (My Little Pony, Teen Titans Go!), the voice of Harley Quinn. The MultiVersus Open Beta will be available in July 2022 on PlayStation 5 and PlayStation 4 consoles, Xbox Series X|S, Xbox One consoles, and PC with full cross-play support.

Will there be other Warner Bros. titles announced during the event or will this truly be it? Could we get to see Batgirl for Gotham Knights here or will that be saved for a different event? What other characters do you think we will see in MultiVersus and will the beta kick off on the same day? Give us all of your thoughts down in the comments and then feel free to discuss. We will be on the floor of SDCC covering everything out there that Warner Bros. has to offer up, so keep checking back for that. This will also include many of the various other things that are not gaming-specific to make sure you know what the convention has to offer the world.