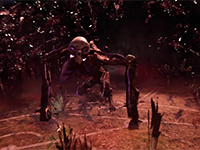 We had a good tease for The Chant not too long ago and it looks as if Brass Token is finally ready to help us all understand what is going on in the game a bit more. This would be their upcoming title that looks like a solid 1970s horror for the PS5, Xbox Series X|S, and PC coming this Fall. One that seemed like such a basic premise with a cult out there, but it turns out that there is a bit more going on in The Chant than we expected. There looks to still be a cult out there, but many more dark things will be coming from that to highlight that humans are not the only true horror out there in this world. They can just bring it into being a little easier than expected.

As it is going in The Chant, it seems that a small group or cult of humans show up to a nice and old retreat. Some of them are a little more reluctant than others, but in the end, they are all gathered to perform a ritual chant. As you will see, things go a bit wonky and one of the participants freaks out during it all. This is where the darkness of The Chant comes in and fills the area with all manner of creatures that are here for horrible reasons. This is where our character must set out to figure out what is going on with the cult, past and present, to be able to shut it all down. That, or maybe, take things up to the next level and finish what the cult set out to do. The latter being one of my wish-fulfillment things that generally never happens in video games. Have a look and see the horrors that are on the way.

Welcome to the Prismic Science Spiritual Retreat on remote Glory Island. Discard your baggage from the past and transform your Gloom to Glory! When a ritualistic chant goes wrong, the combined negative energy of the group opens up a dimension of cosmic terror. To survive, you must uncover a cult mystery of both past and present as the others slowly go mad from a host of parasitic creatures.

The Chant - developed by Brass Token and published by Prime Matter will ship on Xbox Series X|S, PS5, and PC later this year.

Is this what you were expecting from The Chant based on the teaser or does this place the whole game in a new light for you? Do you think we will be able to become the world-ender in the game or will we always go back to being the hero of it all? What other levels of gloom do you suspect will come through to serve or kill the cult in the mix of it all? Let the world out there know what is on your mind for this and then feel free to discuss it all as you so wish. I will have an eye on The Chant here, so be sure to keep your eyes on the site for those updates. I have a feeling we will be seeing much more for this one in the not-to-distant future of it all.