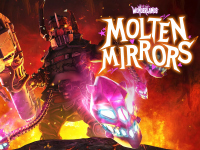 You can keep the Chaotic Great aspect flowing like lava now with the latest update we have for Tiny Tina’s Wonderlands. Here we go with a whole new dungeon out there in the game from Gearbox to keep the story going and offer up all forms of loot out there in the mix too. As if you needed more of that in the Wonderlands given everything that we have been able to loot on the PS4, PS5, Xbox One, Xbox Series X|S, and PC already. Then again, the fans of these games are never happy until they truly have the bazillion weapons in the mix that are always promised out there. Even if most of them end up getting scrapped, sold, or ignored for another that is about the same but with different stats in the mix.

In this new bit of DLC for Wonderlands will see our Fatemaker heading out to break into a heavily fortified prison out there in the world. One filled with the horde of souls that have passed through the walls of it all and a Soul Warden named Fyodor that will need to be bested to make sure we can put some to rest. That or make sure all of the high-powered gear we will be able to pick up will lend itself well to the multi-classed character we should have by now in the Wonderlands. More or less, about what we have come to expect in the game up to now. This time with just a bit more fire and lava in the mix than other locations have had before now. Have a look just below or just dive back into the game to see what is all added into it all for us all.

Break into a heavily fortified prison in Vesper's third Mirror of Mystery! Deep within his mountain stronghold, Fyodor the Soul Warden lords over his horde of lost souls… and some awesome new LOOT!

Embark on an epic adventure full of whimsy, wonder, and high-powered weaponry! Bullets, magic, and broadswords collide across this chaotic fantasy world brought to life by the unpredictable Tiny Tina.

Roll your own multiclass hero and loot, shoot, slash, and cast your way through outlandish monsters and loot-filled dungeons on a quest to stop the tyrannical Dragon Lord. Everyone's welcome, so join the party, throw on your adventuring boots, and be Chaotic Great!

Have you been enjoying all of the updates and DLC for Wonderlands so far or does it feel like more of the same with a different skin? Do you actually keep the various weapons and gear bits you have picked up in the game or do you end up tossing everything fairly quickly? Where do you think we will all be heading in the next massive update that we all know is coming? Sound off in the comments and then feel free to discuss it all as you so wish. More for Tiny Tina’s Wonderlands will be coming, for sure, so be sure to keep checking back here for all of that and everything else that we might have to offer up to you all.