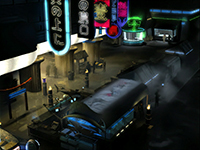 It is finally here and those looking to get a taste of the past can do so with the release of the Blade Runner: Enhanced Edition. This was the edition teased a few years ago from Nightdive Studios that was going to bring this 1997 point-and-click adventure into the light again and on the PS4, PS5, Xbox One, Xbox Series X|S, Switch, and PC. All of which boasting that it would bring the dated visuals of the original Blade Runner into the modern era and fix many of the issues original fans had with the original release. Not only that, but also update things to better fit into the gaming scene as it has evolved over all of that time. All to land on the 40th anniversary of the IP too.

To go along with the announcement that the Blade Runner: Enhanced Edition is out there now, we have a new trailer to look at to try to get a feel for what it has mixed in. Sadly, this does not feel like the massive update that the previous trailers and showings we have had before. More or less, this all feels like they just made the game work on the new systems instead of fully rebuilding Blade Runner into something new. That is not what they were setting out to do, but it does not feel like it is the full remaster that we may have been expecting. That could all be on the trailer and format we have it all here, but it does not shock as it did before. I guess we will just need to love the fact that the game is back and ready for those out there that did not get to experience it all back in 1997.

Blade Runner: Enhanced Edition arrives on modern gaming platforms just in time to celebrate the anniversary of when the iconic science fiction film debuted 40 years ago — which was on June 25, 1982.

Originally released in 1997 by Westwood Studios, Blade Runner was one of its era’s most innovative adventure games. Long praised as a masterclass in game design for its painstaking recreation of the sci-fi cinematic masterpiece, the game delivered an unforgettable gaming experience with groundbreaking graphics, an original musical score, and an original branching narrative seamlessly interwoven with the events of Ridley Scott’s 1982 film.

Becoming widely available to a whole new generation of gamers worldwide, fans of the cult adventure game can enjoy a polished and premium restoration with the original Westwood videos reconstructed and upscaled to 4K resolution and 60 FPS, along with a variety of new features such as modern HD display, keyboard and gamepad support, and a new KIA clue interface. Nightdive has also sourced the original foreign-language translations, offering international fans the game in Spanish, German, French, and Italian, as well as Chinese subtitles — just as Westwood intended.

Blade Runner: Enhanced Edition was made possible by Nightdive's proprietary KEX game engine, which has restored a growing library of classic video games including System Shock: Enhanced Edition, Turok, Turok 2: Seeds Of Evil, Blood, and Shadow Man: Remastered. Renowned for its expertise in video game restorations, fans can expect Nightdive’s KEX-powered remaster to honor the original look and feel of the seminal 1997 game.

How are you feeling about the look of this version of Blade Runner here? Does it feel like it is going to end up being a version that just works on the new systems or will we get to see some of those bigger updates that we hoped for? Will you be able to get past the jaggies and looks of this footage or will that make the game feel too dated to truly enjoy in the modern era? Let us all know your thoughts on this down in the comments and then feel free to discuss it all as you so wish. When we have anything more to share for the Blade Runner: Enhanced Edition, it will be here on the site. Please keep checking back for all of that and everything else we will have to offer up.