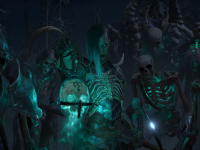 The dead are going to rise once again with the Necromancer coming in for Diablo IV and giving us all a look at how the class could function in the game. Even if this is all more in the cinematic form that Blizzard has for us today, but it does hint toward a few of the in-world aspects of the class we will get to use. More along the lines that while the population will see it all as an evil path to walk, it does not specifically make one in evil in Diablo IV. We might know better when the game lands on the PS4, PS5, Xbox One, Xbox Series X|S, and PC in 2023, but the video we have here definitely shows that we can still summon the dead for some kind of good out there. That whole enemy of our enemy kind of ordeal, if you will.

More or less, the Necromancer only shows up in the following cinematic we have for Diablo IV, but if you want some actual gameplay, you can look just a bit further. This is where the developers breakdown a bit more of what to expect in the final build of the game. We will get to customize our characters a bit more as we head out into the open world of Diablo IV to take on not only the story, but various side missions and events that can happen too. All so we can get to that special end game content that will keep our power growing. This is something we will need to keep at peak shape since the PvP will allow players from all platforms to try to bring us down and take our loot. The last bit being something I most likely will not take part in, unless I am allowed to go absolutely insane with the powers of the Necromancer and have many armies at my discretion out there.

Command the dead with the final playable class in Diablo IV.

Behold what Diablo IV has in store. 🔥

The Diablo IV dev team dives into the latest gameplay innovations coming to the next installment in the Diablo franchise.

Are you glad to see the Necromancer in the mix of Diablo IV or will it be class you ignore when the game drops on us all? How many of the undead do you think we will be able to keep active at one time or will it all be limited for balance reasons? Will you want to get into the end game content out of the gate or will it be something you need to skip to help keep your sanity? Tell us all what you are thinking down in the comments and then feel free to discuss it all as you so wish. Diablo IV will have much more out there for us all, so be sure to keep checking back for all of that and much more. I am sure you will be glad that you did.