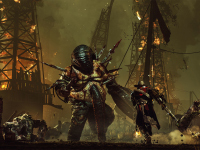 We just had the September 20th release date set down for Evil West not too long ago, and it came with a bit of gameplay to tease it all. Some said it was enough and others said it was nowhere near enough for it all. I am guessing that Flying Wild Hog thought it was more on the lacking side to help build the hype for the game before the launch, so here we are with a whole lot more gameplay to take in. Almost a solid ten minutes of new gameplay for Evil West with very few cinematics mixed in to pad the time at all. Get ready for more of the gore and horrors we will be shooting up here on the PS4, PS5, Xbox One, Xbox Series X|S, and PC.

You can have a look at all of the new gameplay for Evil West that will have us blasting through the normal Wild West settings with explosive boxes and gunslingers to take out. Then it shifts more into the supernatural and starts to give a feel of the title like Darksiders with the melee and gunplay mixed in too. Given how well those titles always flowed, this is a great thing for Evil West here in my eyes. Even if some of it does not feel like it makes sense, specifically the grappling hook stuff and other "parkour" we will be doing while closing the distance to punch and launch enemies into the various things in the world. It definitely shows why we will want to not use only the guns in the game and want to close the gap to punch some of those explosive enemies out there. Have a look at all of that just below and get ready to see how much we have been waiting for up to now.

Evil West, the third-person action game that puts you in the boots of a vampire hunter rescuing a Wild West devoured by darkness, starts unleashing hell with a first Extended Gameplay Trailer ahead of its release on September 20 on PlayStation 5, PlayStation 4, Xbox Series X|S, Xbox One, and PC. Watch 10 minutes of uncut gameplay sequences topped with fresh cinematic glimpses of Evil West’s unearthly narrative.

Did this show off how perfect Evil West is going to be for you or is this a style of game that you are not always in on? Were you curious up to now about why there would be a need to close the gap in the fight and did this solidify why we will need it? How many different enemies will we need to face off against in the game and will it break more of the molds along the way? Feel free to tell us all what you are thinking about all of this down in the comments and then feel free to discuss it all as you so wish. When we have more for Evil West to show off, we will share it all here for you. Just keep checking back in for all of that and much more as we head on into the wicked future of it all.