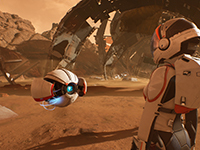 The date to uncover the truths hidden in Deliver Us Mars is getting closer now that it has finally been set down. A date that KeokeN Interactive and Frontier Foundry have, thankfully, set down as September 27th for the PS4, PS5, Xbox One, Xbox Series X|S, and PC versions of the game. As if there were others to talk about right now. Nonetheless, Deliver Us Mars will be coming on that date now and it is time to dig into a bit more of what mysteries will be coming out to us in this game when it does and how it will be building off the previous title that had so many captivated before now. There is still plenty of time for that too if you feel as if you have been missing out on something up to now too.

Try not to get your hopes up too high for the latest trailer for Deliver Us Mars in terms of it spoiling anything or giving us much to work on for the game. It does house a whole lot of new gameplay that has our lead wandering about the Red Planet a bit more and trying to put things together as to what is going on too. There is a whole lot of personal drama going on in this one, so I have a feeling a lot of it is going to be our protagonist working things out in their head or with the rest of the cast of Deliver Us Mars. We could also be way off and this turns out to be a Total Recall thing where none of it is happening but also all of it is happening at the same time. Just to make things a little extra weird before you look at the trailer that gives us something to look at as we wait for September to fly on in.

Uncover the truth behind the ‘Outward’ organization, and learn the fate of Kathy’s father in an action-packed adventure with epic stakes and deeply personal drama when Deliver Us Mars launches on 27 September on PlayStation 5, PlayStation 4, Xbox Series X|S, Xbox One, and PC via Steam and the Epic Games Store.

Does the September timeline go along with what we all assumed we would have for Deliver Us Mars or did you think it was going to be earlier in the Summer here? Do you suspect that most of the game will be us wandering the planet while talking others off the ledge or could that all be a misdirect for the core game? How much do you think this will work into the story from Deliver Us The Moon or will it just be in the same timeline and nothing more? Tell us all of your thoughts on this down in the comments and then feel free to discuss it all if you so wish to. More for Deliver Us Mars will be on the way, so keep checking back for all of that as we get ever so closer to September and when the game fully launches.