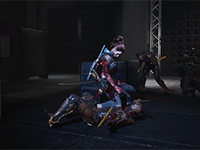 Things just keep getting weirder and weirder for Wanted: Dead with each new gameplay trailer we have out there. It is hard to nail down just how the story is going to go here from Soleil but we certainly do have some explosive and bloody gameplay. A solid third-person experience with all kinds of challenges and action coming to the PS4, PS5, Xbox One, Xbox Series X|S, and PC in Q4 of this year. As long as you need more video games that offer up limb-severing action and anything else that Wanted: Dead has to offer up. It definitely looks like it will be a whole lot too.

Just as with every past trailer for Wanted: Dead we get to see our lead taking on all kinds of enemies out there in the world with a sword and gun along the way. That and more of the Sci-Fi world that it will all be taking place in and how the art style of the game might shift along the way to help tell the story. That is the assumption as we see gameplay shift into an anime-style then shift over to some live-action footage too. This could just be some of the random things we will experience in Wanted: Dead but it feels like it is more important to me in this new trailer. Have a look and see more of the mayhem in the game and various other aspects too.

Have you been able to follow along well with the weirdness of Wanted: Dead since launch or does it feel like the game is going to be all over the place for you? Do you think the various styles will have something for the core gameplay here or will it just be something we see in the cinematics more than anything? Does any of that actually matter to you and will you only be looking at the bloody gameplay you will have here? Sound off in the comments and then feel free to discuss it all as you so wish. If more for Wanted: Dead gets out there, we will share it all here with you. All you have to do is keep checking back in for all of that and much, much more.