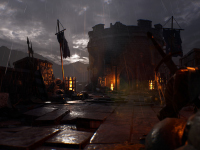 A new map for Evil Dead: The Game is on the way with another iconic Evil Dead location offing more horror

Given the fact that Evil Dead: The Game had/has a Season Pass option to go one before and after its original launch, it is no huge surprise that we are going to be seeing the game grow and evolve over time. The surprising part that we have right now, though, is that Boss Team Games and Saber Interactive are here and ready to start talking about new updates coming to the game so close to launch. In fact, these new updates do not even have anything to do with the extras paid for in Evil Dead: The Game so far but a free one that is coming down the line. Get ready to check out a whole new map with Castle Kandar from the Army Of Darkness film gearing up to hit the PS4, PS5, Xbox One, Xbox Series X|S, and PC in the near future.

Castle Kandar seems to be the next major map update coming from the Evil Dead line and that is something more to take in than just the two still shots we have of it below. If you have played the game at all, you know that the play space has always been massive in the game. Sometimes, truly requiring the cars to get around the map. This new one that is coming does not look like it is just going to be some small add-on to that, but its own massive and sprawling map too. Most likely it will use the underground pits, far-off alters, secluded cottage, and various other elements from the film to film in the space of Evil Dead: The Game too. Not to mention just the castle itself being massive and using so many tight spaces to let the demon…err…I mean heroes rule the day.

All right, you primitive screw-heads, feast your eyes on the first in-game sneak peek at Castle Kandar!

The new map will be free to all Evil Dead: The Game players. More on the Army Of Darkness update and timing is coming soon!

Did you think that we would see an announcement like this for Evil Dead: The Game so soon or did you think they would let the game stew longer than a month before dropping this on us? Do you think it will be more than the castle or will it somehow confine everything that happens in the matches to this single location? Could this lead to more of the solo missions too or will that be saved for something else down the line instead? Tell us all of your thoughts and feelings on this down in the comments and then feel free to discuss it all as you wish. If there is more to offer up for Evil Dead: The Game, and obviously there will be, we will share it all here for you. Please keep an eye on the site for all of that and everything else we have to offer up.