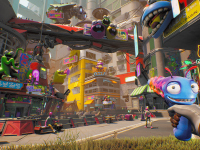 Another title, High On Life, in on the way from the minds that brought us all Trover and it looks like High On Life is not leaving any of that behind

When it comes to sheer comedy in video games, I always have to place Squanch Games up there at the top of the list that know how to do it and with the announcement we have for High On Life, it looks like they are securing that spot again. That would be the studio that has been bringing the various weirdness from Justin Roiland to life and now they are giving us a first-person shooter to offer up the same kind of humor. All while making it truly feel like High On Life could easily build into all of the other projects that the team has made over the years. So get ready to tickle those funny bones on the Xbox and PC when we try to save humanity for some reason here.

There are only some of the basics out for High On Life us to take in as of right now. The story seems to revolve around our hero that is out there to stop an alien cartel that wants to sell humanity as a drug out there. To do so, we are joined by the Gattlians that we need to save out there along the way too. These are sentient alien guns that will help you do your hunting out there too. Each looks to have its own style of firing out there too. You can get a better feel and look at High On Life in the following trailer, but so far it looks like the perfect blending of the shooter genre and the humor the team is known for. I know I am overly excited to see it all and hope it is not as limited as a release that the trailer makes it sound like it could be.

From the mind of Justin Roiland (Rick and Morty, Solar Opposites) comes High On Life. Humanity is being threatened by an alien cartel who wants to use them as drugs. It’s up to you to rescue and partner with charismatic, talking guns, take down Garmantuous and his gang, and save the world!

How do you feel about this level of humor in your video games and do you think High On Life is going to nail it as the past titles have? How many different guns do you think we could get along the way and will they all have the big voice acting with them? Do you think that using humans as a drug is a smart idea or just the downfall of that alien race? Tell us all what you are thinking and then feel free to discuss it all as you so wish. We will share all that we can for High On Life, so please keep checking back in for all of that and much, much more. We will keep trying to mix things up like this as we head on into the future, for sure.