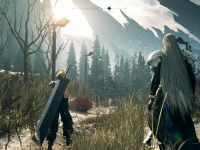 Gods, it has been an insane wait for this but we have the announcement for Final Fantasy VII Rebirth to keep us all excited. No, this is not another remake title coming from Square Enix for the famed IP. This is the next title to keep the story going from the first big portion of Final Fantasy VII Remake on the PS5 and PC. It is kind of odd to have the name shift like that, sure, but it would get a bit long to just keep adding subtitles onto the original until the full story was completely over. I would like to think that is the reason behind all of that. Then again, we may know a whole lot more when this title drops in the Winter of 2023.

Yes, we have to still wait over a year to get the next big chapter for the Final Fantasy VII Remake now. It makes that last six-month delay we were told about sting just a bit more as that would have put it all at less than a year from now. All of that aside, though, we have a new teaser trailer for Final Fantasy VII Rebirth to show off a bit more of what we are going to be getting with it. Even if it does feel like it is focusing on the Cloud, Zack, and Sephiroth portions of the story and none of the possible new characters or areas we will be seeing. Since there is no need to play the original version of the game to enjoy all of it, that could mean it could follow closely or be vastly different so there truly is no telling at this point. Here is a look at it all for now.

This next standalone chapter in the Final Fantasy VII Remake trilogy will launch next Winter (2023).

Are you overly upset that you will have to wait that long for more of this Final Fantasy VII story? Is it good to know it is only a trilogy or does that mean we will see more between missions as we did with the Yuffie content, thus making a six-parter? What characters do you think will join the roster in this one and how long until we get Vincent into the fight with us all? Let everyone out there know what you are thinking down in the comments and then feel free to discuss it all. More for Final Fantasy VII Rebirth is definitely on the way to us all. We will keep dropping every little nugget that we can here, so keep checking back in to stay up on all of it.