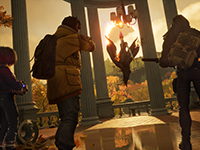 After all of the delays and waiting for Redfall since it was first announced, we are finally here with the first true gameplay for the game. We still have to wait until 2023 to see it hit the Xbox Series X|S and PC but that is going to be made a little less difficult with what Arkane Austin has for us now. Not only is it the gameplay we have been waiting for with Redfall, but it is a bit more on the story and expansions on the characters we will get to play solo or in co-op. Not to mention to try to make vampires scary once again after all of the glam that has been going on for a while.

As it all turns out, the vampires in Redfall have shown up to the titular town, made all of the water vanish, and blotted out the sun from the sky. This is to explain how everyone is all cut off from the rest of the area and just the game map and how we will need to be ready for the vampires at all times. All while heading out with the various different characters that fit the normal squad-shooter scheme. There is the sniper, brute, lore/support, and the one with supernatural powers for some reason. The latter sounds more like the leader in Redfall even if we can control them all and tell the story as we head to each tourist trap to find what we need to end the endless night and vampire scourge from trying to destroy all of the humans out there.

Redfall used to look like it was straight out of a postcard.

That was before a legion of vampires staked their claim over the island…and its inhabitants. By blocking out the sun and pushing the ocean back from Redfall’s shores, these new vampire overlords have completely cut the island off from the outside world and any hope of rescue.

That’s where you come in. You’ll pick from a roster of four diverse heroes and either go solo or team up with up to three other players to round out your squad. Armed with a wide array of customizable gear, specialized weaponry, and unique character abilities, ranging from the scientific to the mystical, you’ll take on the bloodthirsty threat and take back Redfall.

Bite Back when Redfall launches in 2023!

Was it fully worth the wait for this gameplay for Redfall and does the extra time needed definitely shine through? How often do you think we are going to have to fight vampires out there or will it be more of the cultists to keep the supernatural for the bigger events? Do you think we are going to be given a chance to save the cultists as well as the general public in this game or will it be too far gone for anyone and we will just need to put a stake into all of it out there? Sound off with all of your thoughts on this down in the comments and then feel free to discuss it all as you so wish. When there is more to offer up for Redfall, know we will share it all here for you. Please keep checking back in for all of that and everything else we have to throw your way.