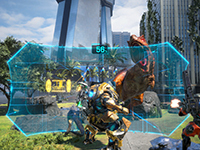 Love it or not, Exoprimal is still coming even if it is not the Capcom IP you wanted to see back in the mix. I, for one, always love when developers/publishers try to give us something new and not just recycle the same old titles we have had before. Things may still need to wait and be seen for Exoprimal until 2023, but I am always willing to give new things a chance. Even more so when the teams are willing to offer up loads of gameplay to give us the best feeling for how the game is going to function in its loop. Which, to no surprise, is what we have a whole lot of to look at here right now.

It was shown off before that Exoprimal was going to be a team-based shooter in a world that constantly had dinosaurs rushing in to wipe out humanity. It still looks like that may be the story going on in the core game, but here it looks like we are seeing either some of the training for our characters going on or that things might not be as it all seemed in Exoprimal. We are getting four different styles of character to play from the looks of it and it also looks like the dinosaurs are not always going to be the basic version of them too. I guess there needs to be a solid reason that some of them can attack at range and that answer is with dimensional modification.

There also looks to be various mission modes in Exoprimal that we have to look at in both the basic and extended gameplay we have to share. Most of them look like basic wave survival modes with different focuses on what the teams should be doing or how many dinosaurs they need to kill. One of them is more of an escort mission where the team moves a needed object to its intended target while defending it along the way. Mostly the basics we have come to know from games like Exoprimal and those it takes inspiration from. Have a look just below and see if it is still going to be the game for you.

Congratulations - Aibius has selected you for a live combat test of its latest Exosuits. The first team to complete their assignment wins. To ensure optimal combat data, you will be fighting for your continued existence.

Get a fresh look at Exoprimal’s Dino Survival mode in this showcase of a full match between two opposing teams! An ever-evolving game mode with objectives that constantly change at the whims of the next-generation AI, Leviathan, Dino Survival will put you and your team’s skills to the test each and every time you play.

The wargame will begin shortly. Have a super day!

Are you still not happy that Exoprimal is the game we are getting and not the other one that the internet rumored about? Do you like seeing the various ways the dinosaurs will be swarming us or is it just too close to other horde modes for your liking? What other gameplay modes do you suspect will be in the mix or did we just get to see them all in the videos here? Tell us your thoughts on all of this down in the comments and then feel free to discuss it all as you so wish. We will have more for Exoprimal, for sure, so keep checking in for all of that and much, much more.