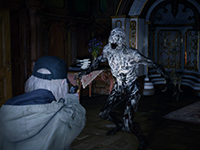 As if there was not already enough news for Resident Evil Village and the overall IP in general, we have more to drop on you here. It should have been figured after Capcom did a massive dump during various streaming events over the past week but still had their own scheduled too. That was to get one of the bigger drops out there for the new Gold Edition of Resident Evil Village that is on the way to the PS4, PS5, Xbox One, Xbox Series X|S, and PC on October 28th. A new addition that will house not only the core game but a bundle of content titled the Winters Expansion. It kind of sounds more like a definitive edition of the game more than anything just with some of the upcoming DLC that drops on the same day.

This DLC being a new story for Resident Evil Village titled Shadows Of Rose. This story will take us into the future by about sixteen years where we play as Rose, Ethan and Mia's daughter that has all grown up now. She is on a hunt to find out what happened to her father and (presumably mother) over the course of their Resident Evil arc. It also looks like Rose will be traveling back into the titular village of the game and encounter some new and old monsters along the way. That also includes some of the residents that seemed to be a bit helpful from before, so things might have taken a hard turn for everyone over the time that has passed on by.

If that is not enough, this will also bring along with it a few other updates for Resident Evil Village that may vastly change how some play it now. There will be a third-person option to play the entire game through once more so you can get closer to that Resident Evil 4 feeling that was already out there when the game was first teased so long ago. You can see a bit of it in action just below but it does make it feel like the horror might be turned down a bit for those who get terrified easily in the game. Not to mention to make it easier to spot any incoming enemies that Ethan or Rose might not catch in the corner of their eyes in the first place. No matter the case, it does look like a solid and great update to add in here.

Gold Edition includes the base game with 3 additional major new features, including the new story content Shadows of Rose.

Have you always been hoping to see the FPS Resident Evil titles get the third-person update or do you like having the variations between titles? How deep into the lore of the universe do you think Rose is going to go with the story or will it be so far outside that they do not need to rely on any preset lore for us? Are you happy to see some of these new characters joining the Mercenaries mode or have you mainly skipped it before now? Sound off in the comments and give us all of the feedback down there. We will keep the news flowing for Resident Evil Village as it seems to keep coming. Please keep a close eye on the site and all of our socials to be sure to stay as up to date as we are.