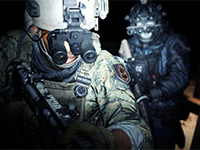 The gameplay reveal for Call Of Duty: Modern Warfare II is here and it promises us to be the most advanced Call Of Duty we have had to date

The date we have all been waiting for is here and we now have the first real gameplay out here for Call Of Duty: Modern Warfare II to show us all how it is going to look after all of this time. Infinity Ward is back for us all and bringing in all of new technology to help make this the next massive entry into the IP. Even if it does share a name with the previous massive title too. Naming is not everything but at least something that we need to take note of here. Beyond that, we have the first true gameplay to look at now to see how this Call Of Duty will leave its legacy on the PS4 and Xbox One while paving a new path on the PS5, Xbox Series X|S, and PC. That is where the IP is heading in the future with all of that becoming the current-gen hardware for us all.

I do have to say one thing before we move into the gameplay reveal here, though. The last we had to look at Call Of Duty: Modern Warfare II I postured that we might have been seeing live gameplay then and not a pre-rendered cinematic to help hype us for this big reveal. Given the gameplay that we have today, it does look like that was not what the game is going to look like at the end of it all. It still looks amazing with this new gameplay but not as photorealistic as we could have been hoping for. Maybe that is not what the Call Of Duty IP needs at this point given the world's state. Enough of all of this, have a look at the first gameplay out there and get ready to dive into the campaign this October 28th. I guess there is also the multiplayer out there too that are in on this IP just for that. Those few of you out there…

Call Of Duty: Modern Warfare II will kick off a new era for the franchise when it releases worldwide on Friday, October 28. Players will experience what made Task Force 141 become the iconic and legendary squad that it is, featuring familiar heroes and new allies who will be challenged to work together in missions across Europe, Asia, and the Americas. The Campaign is set to be an incredible experience, featuring offshore sieges with underwater combat, all-out explosive assaults from 30,000 feet above enemy strongholds, and high-stakes, low-profile stealth missions. Players can also join up with their duo for evolved Special Ops, a tactical co-op mode that will advance team-building skills, and also sets the scene for the near-endless hours of gameplay available in the world-class Multiplayer.

In Modern Warfare II’s Multiplayer, players will be able to try out and level up the multiple base weapons, explore a wide range of maps and modes, and meet an international cast of Operators, and more. Modern Warfare II will also have an incredible post-release calendar, set to include a massive amount of free post-launch content drops featuring new maps, modes, and blockbuster special events that can’t be missed.

Soon after the launch of Modern Warfare II, Warzone 2.0 will launch as an extension of the Modern Warfare II universe. With it comes new technology, new features, and new gameplay that work seamlessly together. Throughout, the team has taken a wide range of community feedback to heart with both experiences. In order to fully deliver this state-of-the-art Warzone experience, Warzone 2.0 will feature new Modern Warfare II content and systems with brand-new progression and inventories. To add, today’s Warzone will continue as a separate experience that will include a continuation of player progression and inventories within that Warzone experience.

Call Of Duty is taking a generational leap forward, ushering in a new era, beginning with Modern Warfare II, which leads the most ambitious rollout ever across the franchise.

Did you have your hopes set for a photorealistic Call Of Duty experience or are you glad that it just looks great without diving into those new waters? Will you be going in on the campaign for this one or will you be sticking to the multiplayer-only aspect of it all? Do you want more than just access to the open beta for a pre-order or is it a good thing that is all they are offering to keep the rest available for everyone out the gate? Sound off in the comments below and let the world know what you think about all of this and then discuss it all. We know there will be more for Call Of Duty: Modern Warfare II, so keep checking back in here for all of that and all of the other updates that we will have along the lines for you. You should not be let down by any of it for sure.