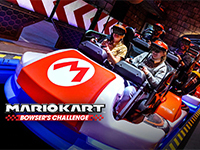 The U.S. location for the Super Nintendo World is coming early in 2023 with one of Nintendo’s bigger titles getting a showcase

There was a whole lot of waiting and concern for the Japanese version of Super Nintendo World to open and it has done so with some flying colors. Even during one of the higher points during the pandemic. That was only the first of three different locations that Universal Parks has announced with the second one planned to open up in the Hollywood location. Plans that have already been fully confirmed with construction already underway for that Super Nintendo World. Something that has only been further confirmed to be set with the park slated to open up fully in Early 2023 now. There goes some of that international travel for some fans out there now. Unless you are one that is reading this and still wants to go to the original one instead.

That all said, this announcement also comes along with a look at the first Nintendo attraction that fans can hop into when the part opens. The Mario Kart: Bowser’s Challenge will be one of them after we enter the new land via a warp pipe from the main Universal park area. It will be a motion ride that uses some of the AR technology out there to put us into the race with various other characters from the Nintendo line-up. All so we can make it to the end and earn that golden trophy. Also, to most likely put us into the next gift shop where we will be able to buy one to take home and show off to the world that we can win at Mario Kart and not just claim it. Even if this will be an on-rails motion experience in the real world.

Ready to experience Mario Kart like never before? Put on the special goggles and battle Team Bowser on iconic Mario Kart courses alongside Mario, Luigi, and Princess Peach. Collect coins and throw shells to win the Golden Cup on the world’s ﬁrst interactive Mario Kart ride with cutting-edge technology at Super Nintendo World. Opens in early 2023.

Did you always have your heart set on going to the Japanese version of the Super Nintendo World or will you be aiming to go to this one instead when it opens? Do you think we are going to get all of the same attractions at this park that we have already seen or will we get something truly new to mix it up for us? How special do you think all of the merch will be once in the park or will it be the same things we normally get from these parks and the companies in general? Let us all know down in the comments and then feel free to discuss it all as you so wish. As more for the Super Nintendo World park is revealed, we will update you all here. Just be sure to keep checking in for all of that and much, much more.