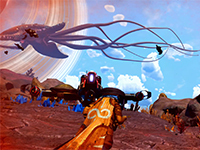 No Man’s Sky is expanding even further into the reaches of the virtual space. This time with the seventh expedition that Hello Games is setting up for us to embark on. This one titled simply, Leviathan. Not because we are going to be heading underwater from the looks of it, but because there seems to be this mythical creature out there in No Man’s Sky causing us all to be stuck in a time-loop. A time-loop we will have to master to proceed through the expedition and gather all of the rewards in the mix. It looks like we have a new rogue-like getting mixed into this game now.

You can get a little look at this new expansion coming for No Man’s Sky just a bit lower, but it does look like it will be giving us all a bit more action in the mix of things. Granted, it has been a bit of time since I have had a chance to experience what the game currently has to offer, so this could be par the course, but it does look like it has been constantly shifting and changing up to now. It is curious to see this kind of an adventure where we will be doing the live-die-repeat gameplay loop a bit more, but if it keeps players happy and coming back, I am sure they will keep the ball rolling in that way.

The 7th No Man’s Sky expedition, “Leviathan”, finds Travellers trapped in a time-loop curse suspected to trace back to a near-mythical space creature. Join the community effort to help recover memory fragments, lost remnants of previous loops, and liberate the universe in this unique rogue-like survival adventure. Jam-packed with rewards, including the WhaleStalker Cloak, Temporal Starship Trail and, the ultimate prize, the Leviathan itself, an imposing living frigate to add to your fleet.

Have you been playing No Man’s Sky non-stop up to now? Will this get you back into the mix of things with a new gameplay element and style mixed in? How many more expansions and updates will we get before they fully move on to a new project out there? Give us all of your feedback in the comment section below. I will try to keep bringing you all more for No Man’s Sky as it is offered up out there. Just keep checking back in here for those updates and anything else the rest of the team has to offer up along the way.