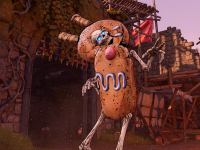 There has been a whole lot that has gone on since the launch of Tiny Tina’s Wonderlands up to now. Ignoring all of the other games out there that have been begging for our attention that have not come from Gearbox, we have seen more patches, and the first part of the Season Pass for the game has already launched. This is why we are back to let you know that Part Two of the Season Pass is now ready for you to download and drop into your version of Tiny Tina’s Wonderlands. That or entice you to take the leap into this fun title for the first time with even more content than we could have hoped for during our first play of the game. Thus is the cycle of the industry we are at now…

This new bit of DLC will add in the usual loot and further bits of story fun we can expect in the Wonderlands along with a few new bosses and all of the extra loot that should be found too. All while sticking to a food and baked good kind of theme from the looks of it. Seeing as it uses the term witch a few times too, my guess is that it will all be linked back to the Hansel and Gretel story of the witch in a gingerbread house too. They do need to use what works and it could lead to a whole lot more fun. Even if it all sounds like it was set up sometime after the original game wrapped production and will focus on characters that were not part of the core story. Excluding out our Fatemaker, that is.

Trouble is brewing as Imelda, the Sand Witch, unleashes 💥culinary chaos💥 upon the Wonderlands! 🥪

Each week Imelda will transform into a more powerful version of herself, along with new loot to collect along the way!

Embark on an epic adventure full of whimsy, wonder, and high-powered weaponry! Bullets, magic, and broadswords collide across this chaotic fantasy world brought to life by the unpredictable Tiny Tina. Roll your own multiclass hero and loot, shoot, slash, and cast your way through outlandish monsters and loot-filled dungeons on a quest to stop the tyrannical Dragon Lord. Everyone's welcome, so join the party, throw on your adventuring boots, and be Chaotic Great!

Did you need this reminder that the Season Pass for Tiny Tina’s Wonderlands is still flowing out there or had you moved on to other titles already? Do you suspect the rest of the content will be in a similar vein or will we see something truly new for the game down the line with the rest of the releases? Does it sound like the voice cast is a bit off here or is it the core crew we had in the base game already? Tell us your thoughts on all of this and discuss it all in the comments below. When we have more to share for Tiny Tina’s Wonderlands, it will be right here. Just be sure to keep checking back in for all of that and everything else we are working on.