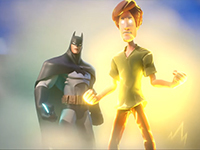 The crews and teams for MultiVersus are gearing up more and more as we get closer to the launch out there. This goes along with the alpha and beta tests that we are going to see here in short order for the PS4, PS5, Xbox One, Xbox Series X|S, and PC too. Player First Games is doing a solid job so far and want to make sure we know the game is still coming to us. That is why the promotional footage for MultiVersus is flowing once again to give us a feeling as to why the events of the game are going to go on. Mainly with the reasons between some of the odd team-up options we are going to see. There does need to be some reason that Harley and Taz are on the same side of things, right?

What we have to look at for MultiVersus here, is all promotional, but it does hint as to why things are flowing the way there are for the characters. It looks like it will all be accidental and situational for the explanations as each of the characters are pulled into the new universe they are in. Not that many gamers out there are overly concerned about the reason that the characters in MultiVersus, but for those lore fans out there, this is the first step toward it all. None of them will be anything locked in for the final game, obviously, but it is what it is as this is all just a reminder the game is coming and there is another alpha test coming up in July. That and showing off Taz, Velma, and The Iron Giant joining the roster out there.

MultiVersus — You’re With Me!

What in the MultiVersus is going on here?! Big news for all our MVPs, Open Beta is on the horizon! See you in July.

In MultiVersus, the Multiverse is at your fingertips as you battle it out in intense 2v2 matches. Up against Batman & Shaggy? Try using Bugs Bunny & Arya Stark! This platform fighter lets you play out your fantasy matchups in a fun co-op or head-to-head fight for supremacy.

MultiVersus is an all-new free-to-play, platform fighter videogame. With an ever-expanding cast of iconic characters and legendary universes, MultiVersus will feature multiple online modes, including a team-based 2 vs. 2 format, 1 vs. 1 matches, and 4-player free-for-all, along with upcoming content-filled seasons.

Do you really care as to the reason everyone is teaming up in MultiVersus or are you a lore junkie even for fighting games that are poised just to be fun? Are you glad to see Taz or Velma mixed in or did you want other characters offered up to the roster for us all to play? Will you be playing the alpha or beta tests coming up or will you stick to the full game when the free-to-play version drops later down the line? Feel free to let us all know your thoughts on this down in the comments and then let the discussion flow. More for MultiVersus will be coming to us all soon, so keep a close eye on the site for all of that and much more.