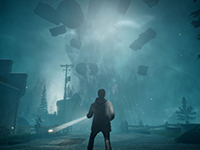 It is hard to believe that the original Alan Wake dropped on us all twelve years ago and we are only now getting a sequel to it all. That is not the big news here, but something worth thinking about when you notice how hard making video games can be. Especially when they are also trying to remaster the original and also bring us a TV show based around Alan Wake. A TV show that looks like will happen with AMC picking up the rights to make it finally. Now even more gamers out there will get to experience some of the story even if they do not have any of the platforms to play it on.

Speaking of, that is another one of the fun updates we are getting here too. It looks like those that want to play the Alan Wake Remastered will have the option to do so on the Switch if they want. None of the finer details are given about that, but just that this title is going to head there after hitting all of the current-gen systems we have to experience it all on. Thus, giving more fans the chance to get ready for Alan Wake 2 when that does finally launch out there in 2023. Which, sadly, brings us to the last bit of news we have for the IP out of all of this.

Work is still well underway for Alan Wake 2 and there are no delays listed as of yet. Unless you want to count the fact that we will not be seeing any demo gameplay this Summer as we were originally told would happen. The reason for this is that the team is focusing more on getting the final build of the game out to us as quickly as possible so we can dive into the horror-filled world once more. Giving us the gameplay demo would take away from that work a bit and they would rather just give us a great Alan Wake 2 experience instead of hyping it up before launch. Not that the game needs much hype that the fans are not making already.

To celebrate the anniversary of Alan Wake (2010), we put together a video talking about the past and future of Mr. Wake, including updates for Alan Wake Remastered and Alan Wake 2.

Coming to PC on the Epic Games Store, PlayStation 5, and Xbox Series X|S in 2023.

Will you be playing Alan Wake Remastered on the Switch when it lands out there or will you be sticking to the versions we have already? Do you think we need to have a TV show for the game or will that just be a nice to have given how vocal Sam Lake has been about getting into that medium? Do you think we will see much for the sequel until it has hit a solid beta build or will we all get some shocks during the upcoming gaming events here? Give us all of your feedback in the comments and then feel free to discuss it all. When we have more to share for anything Alan Wake, know it will be waiting right here for you.