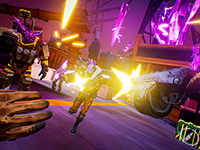 We have talked about it before, and now a whole new class of players get to enter into the virtual world of Fracked to see what the craze is all about. It is now out there for all of the PC VR headsets so you can choose which one you want to give it a go with. Not to mention that nDreams did bring it to the PSVR not that long ago, so it is just opening more doors for gamers that want to see just what Fracked has in store. Given the setting and theme of the game, it is not too shocking to know that many VR players would want to have that super-agent style of game at their fingers so they can feel like the hero the world never lets them truly be.

You can get a little taste of what Fracked holds just below for us all and how it could look when running on your PC out there. In the game, though, we will play as a reluctant hero out there in the weird world that will need to defend a mountain facility from an army of interdimensional enemies poised to do what they do best. That would be kill us all and end things as we all know it. That is where all of the explosive and shooting comes back in with Fracked as we head out to do all of that. All while climbing, running, and skiing in the mix of it all too. have a little look at what the game holds and what you could have been missing out on up to today.

Fracked, the trailblazing and critically acclaimed VR action-adventure, is now available across PC VR platforms (Viveport, Steam, and the Rift Store). The game is also available to all Viveport Infinity subscribers from today!

Fracked is natively compatible with HTC Vive Pro, Valve Index, and Rift S headsets, while Meta Quest and Meta Quest 2 owners can get involved in the action via the Oculus Link Cable or Air Link system.

Play as a reluctant hero, stuck deep inside a remote mountain facility and forced into a final stand between the planet and the ‘Fracked’ - an army of interdimensional enemies. There’s no room here for subtlety and stealth, this is bold, brash, and explosive! Alone. On the edge. Really fracked off. Humanity’s survival is in your gloved hands!

Were you holding off on Fracked until it hit the PC or did you dive in on the PSVR? Do you think this is a great way to give players this kind of fantasy or will the VR be a bit rough on it all? Would this be best played in a freezing room with fans turned on or would that be too much of an immersion into the world? Let us know your thoughts on all of this down in the comments and feel free to discuss it all if you so wish. If we have anything more to share for Fracked, know we will share it here for you. Just be sure to keep checking back in for all of that and much, much more.