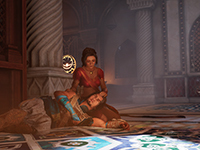 Things are not looking great for the remake for Prince Of Persia: The Sands Of Time Remake, as we are seeing a bit of a delay once more. Steam for this game seems to be slowing down for many out there even though Ubisoft is making sure we all know that it is still coming. This time just from a different division of their studios who will be taking the work done so far for Prince Of Persia and make sure it does show up for the PS4, PS5, Xbox One, Xbox Series X|S, and PC at some point. We are now looking at further into 2023 now at the earliest, but that is an estimate and nothing that has been declared by Ubisoft for now.

Beyond all of that, there is no real other reason offered up for the delay of Prince Of Persia: The Sands Of Time. Just the game will be moved to the Montréal studio to lead things and that some of the work from before will be used. That does not offer up too much to explain things, but it would be easy to assume that they were not able to meet the expectations that we would all want. Even if it would be nicer to have a Prince Of Persia game made by a team that is in the middle of the culture and knows exactly what is going on. I guess we will just have to wait and see if this is the best idea to go with.

An update on the development of Prince of Persia: The Sands of Time Remake pic.twitter.com/8xQpqyPSwQ

Was it to be expected that this Prince Of Persia would be pushed a bit further or is this a bit of a shock to you? What do you think is the full reason that it was shifted over and was it due to the teams not being able to meet the demand or something else? When do you think we will see this remake out there or is it showing signs that it will just be canceled along the line? Tell us what you are thinking down in the comments and then feel free to discuss it all. More for Prince Of Persia: The Sands Of Time Remake will hopefully be on the way to us and we will share it here when we can. Just keep a close eye out for all of that soon.