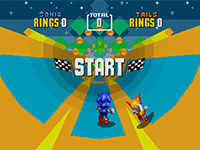 All of the Sonic fans out there can get ready to go a bit faster with yet one more collection coming to us all from SEGA. A new title that is poised to land on the Blue Streak's birthday of June 23rd, 2022 for the PS4, PS5, Xbox One, Xbox Series X|S, Switch, and PC. Also to build off the recent release of the film too, but here we go with the announcement of Sonic Origins. Just as the title suggests too, it will have more or less all of the original titles remastered and ready for us all to take on again. At least for the first three titles and the SEGA CD title too. A nice grouping of things, but there are even more extras mixed right in too.

Sonic Origins will give us all of those classic maps and runs again with the ability to run through with Sonic, Tails, or Knuckles as we so wish. All in the classic mode of it all with the letterbox style for the screen, or we can go with the anniversary mode that gives us a full screen to look at and unlimited lives to make it all the way through the list of titles without getting a true game over. We will need that to make getting all of those medallions and other extra to look at once we need to take a break from running around. Now we just need to wait a little longer to be able to bring down Dr. Eggman once again. Have a look and see which version of the package will be for you.

Sonic fans, get ready to experience the classic Sonic The Hedgehog games like never before! Sonic Origins is an all-new multi-game collection reintroducing the fan-favorite 2D Sonic titles that were originally released on the SEGA Genesis/Mega Drive platform — Sonic The Hedgehog 1, 2, Sonic 3 & Knuckles, and Sonic CD, digitally remastered for current-generation platforms. Developed by SEGA, Sonic Origins delivers the legendary, non-stop Sonic action found in the original games, while providing a fresh twist with remastered visuals, added features, new content, modes, and more. The compilation of titles included in Sonic Origins is set to release digitally on Sonic’s birthday, June 23, 2022, on PlayStation 5, PlayStation 4, Xbox Series X|S, Xbox One, the Nintendo Switch family of systems, and PC. Today, Sonic fans can pre-order Sonic Origins and get access to exclusive pre-order incentives.

In Sonic Origins, players will join Sonic, Tails, and Knuckles to race at lightning speeds across remastered versions of iconic levels like the Green Hill Zone and Chemical Plant Zone, for a classic supersonic experience modernized for current-generation platforms. Players can switch between the Classic or Anniversary Modes to spin through loop-de-loops and score rings on a mission to save the world from the evil Dr. Eggman. With Sonic Origins, Sonic fans new and returning can celebrate the classic Sonic games that built the legendary franchise into what it is today. With new remastered visuals, characters, game modes, game zones, and more, Sonic Origins brings the best of the original Sonic titles to the modern day.

Have you been pining for all of these Sonic titles to come back to us all or did you want them to stay in your nostalgia memories? Do you think that the new mode will bring the game down a bit or will it be something to do so you can collect everything along the way? Do you think we are going to see the rest of the titles get the same treatment moving forward or will that be based on the sales of this one by itself? Let us all know down in the comments and then feel free to discuss it all as you wish. If there is more for Sonic Origins, we will share it with you here. Just be sure to keep checking in for all of that and much more as we go forward in life.