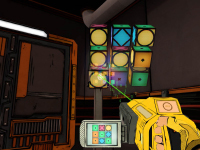 If you have been up on The Last Worker or not, you may be excited to hear that this title is getting a bit of an expanded voice cast in the mix. Not that Wolf & Wood did not already have a solid one beforehand, but it looks like they wanted more with Zelda Williams and Tommie Earl Jenkins joining in to help further the narrative we are going to experience on the PS5, Xbox Series X|S, Switch, and PC with VR options where they are available. Given that The Last Worker is diving into a darker world than the real one could be heading to, it could be worth it to make sure the tone and feel comes across perfectly. Just as we see in many of the other titles that Wired Productions has out there.

For those that are out of the loop on The Last Worker, this is a first-person adventure that takes us into a dystopian future where capitalism controls so much of the world. As we go through the puzzles and events of the game, we will see a very thought-provoking story come about to show how it is going to be something not to thrive toward, unless you just want to exist and not thrive. I am sure there is much more going on in The Last Worker, but thankfully, they are keeping that under wraps until the game launches later this year on all of those platforms. It will be interesting to see how it will function on the VR side too and how far it will go into the metaverse side of things as it feels like it is. Unless you do not see the new VR baby skin as a nice little commentary on that and how the world is going down.

Zelda Williams (The Legend Of Korra) and Tommie Earl Jenkins (Death Stranding) join the star-studded cast of The Last Worker, a first-person narrative adventure centered around humanity’s struggle in an increasingly automated world.

What do you think about the new actors coming to The Last Worker and will it make the story flow that much better? Do you think this will be seen as a slice of reality or will it be just for fun entertainment aspects instead? Do you think this is a slam on the metaverse of the world or just where we are as a society that I am focusing on that? Let us all know your thoughts down in the comments and then feel free to discuss it all. If we have more to share for The Last Worker, know that it will be here for you. Just keep checking back in for all of that and much, much more in the coming days, weeks, and months.