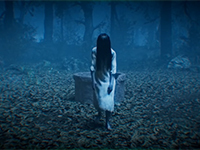 It might have taken more than seven days to get it since it was first announced for Dead By Daylight, but the next killer for the game will be coming from Ringu. The Ring for those that have no clue what the other title is. This was a character that Behaviour teased for us a while back and now we can gladly see that we will finally have it all pay off in Dead By Daylight on March 8th. A little bit longer than seven days again, but we cannot complain when it will be another killer and survivor option have in the game based on all of the other horror icons we have had over the decades. Just get your players ready for it all…

Obviously, this new DLC for Dead By Daylight will be giving us both a killer and a survivor with a setting pulled from the films over the year. We will be getting The Onryō as the killer to slowly stalk around the lands and twist others into the messed-up visages we have seen from the films. Those not looking to do that, will be able to take on the role of Yoichi Asakawa as the survivor among the various others already out there in Dead By Daylight. All of which should have their own bonuses and weaknesses as the IP generally gives us. They just do not seem to be highlighted as of yet. Maybe that is when we will see that seven days aspect play in for this next bit of DLC…

Unspeakable horrors lurk beneath the water.

Spread the curse to Dead By Daylight with Sadako Rising, a new Chapter inspired by Kōji Suzuki’s novel Ringu and the original film adaptation.

Did you find it odd that we had the tease for the character in Dead By Daylight so long ago and are only now getting the true reveal? Do you think we will see something vastly different for this character over the past ones or will it fall right in line? How do you think that Yoichi will handle when compared to the others or will it feel like a skin just to say there is a new survivor? Tell us all of your thoughts on all of this down in the comments and then feel free to discuss it all. As more for Dead By Daylight seeps out there, we will keep sharing it all here. Please keep tuned in to the site to make sure you do not miss out on a single update.