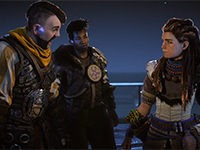 The story is a little out there already for Horizon Forbidden West and now we get a chance to see more of the cast that will be bringing them all to life. Most of them are back to reprise their roles from before and others are completely new members bringing us completely new characters too. That is kind of the way this all goes and it looks like Guerrilla Games have tapped some bigger names out there to help with all of this. Especially when you see that Carrie-Anne Moss will be joining Ashly Burch in this outing. All so we get an expanded world for the Horizon line that has already been expanded quite a bit already. We are just going to be seeing a whole lot more on February 18th when it hits the PS4 and PS5.

In addition to those big names here, Horizon Forbidden West will be featuring a whole bunch of other great cast members in the mix. Those just seem to be the two main ones with Aloy being voiced again by Ashly and Carrie-Anne bringing us the new Tilda character. You can get a fun look at how they are all bringing us everything they have to make sure this is the next best Horizon title to enjoy. Given how heart-filled the story has been up to now, it is good to see that the care is still here and they did not just throw in the usual big names to bolster sales. They have talent that can bring it all to true life once again and keep us fully engaged.

Meet the acting cast behind some familiar — and some new — characters from the world of Horizon.

Join Aloy as she braves the Forbidden West, a deadly frontier that conceals mysterious new threats.

How are you feeling about the cast we have here again for Horizon Forbidden West and will it scratch all of those itches? Did you ever fear we would be getting a b-team in the mix or will this IP only work with the core cast that has been established? Who do you think Tilda will be in the game and will it further expand the universe beyond what we thought it could be? Let us know all of your thoughts down in the comments and then feel free to discuss it all. More for Horizon Forbidden West is on the way, so be sure to keep checking in on the site for all of that and much more.