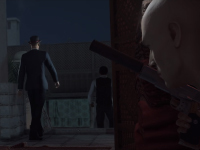 Just when you thought you might be able to get out of the World of Assassination, Hitman 3 ramps up the new updates to draw us all right back in. We are not talking about just some basic updates that IO Interactive have put together to make the game look better and function better. No, we are talking about some massive updates as we roll into year two for Hitman 3. Updates that will bring with it some new gameplay modes, visual extras, and the inclusion of PC VR into the mix of the game. Yes, everyone that has a VR set up should be able to play this game with their headset around January 20th now.

While getting access for more to experience Hitman 3 in VR is nice, we also need to focus on the gameplay extras that are coming here too. We are also getting a gameplay mode called the Elusive Target Arcade. This mode will take the Elusive Target mode from before, but chain them along for a longer ordeal in Hitman 3 that will play over many different days instead of the one-and-done situation we had before. Also, this will carry over and create new issues for the rest of the target line that we will only get one chance to take down. A solid shift from what we have already had as a winning combination out there.

The other massive update, and this will be hitting Hitman 3 later in the Spring, is the new Freelance mode. In it, we will head into our own safe house for Agent 47 that we will get to not only plan our missions from, but set up in our own way. Taking advantage of that, we will have to make sure we plan everything from there, as we will no longer have a handler when taking on contracts so nothing will be provided or carried over freely. If we drop a weapon in the mode, we will need to buy it or find it again so we can use it once more with our hitman. Thus making the world a little more persistent on our end.

New game modes, new maps, and new ways to play are all on the way to the World of Assassination in 2022.

Did you expect to see all of this coming for Hitman 3 out of this year or did you think the team was moving on to a different project? Do you like the sound of the Elusive Target Arcade or will that be a mode that still does not get all the love? Will you be taking it all on in VR now or will you be sticking to the basic modes you have known for a while? Let us all know down in the comments and then feel free to discuss it all. More for Hitman 3 is going to be on the way, and we will share it all here as we get it. Just be sure to keep an eye on the site and all of our socials to stay up to date with us.