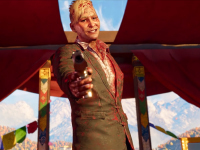 The massive villains from the Far Cry lines are coming back and here we go with the second one in the mix. Pagan Min is the next one and looking to enact some control back over the world and lands that Ubisoft has for us in the latest title. Taking all the work that the character has done over the years and placing it all in the world of Far Cry 6. It is something we all knew was on the way to us as part of the DLC packs announced, it is just out there now on the PS4, PS5, Xbox One, Xbox Series X|S, and PC. Not only to keep the game going a bit longer but to give us a weird bit of closure on another of the iconic villains from the past.

Just as we had in the last update, this one allows us to take that classic Far Cry 4 villain for a spin in the world and uncover some of the things that made Pagan into that polite villain. At least if you were able to beat the game in under fifteen minutes from before. The following trailer looks to highlight some of that as well as how some of the gear and effects we can unlock will carry into the bigger Far Cry 6 landscape. If you needed another reason to go back in and explore the rest of the lands out there. It is still a massive game and things are just expanding more and more here.

Enter the twisted psyche of Pagan Min, the ruthless dictator from Far Cry 4. Experience the world through Pagan’s eyes, uncover new insights about his past, and unlock rewards that carry over into Far Cry 6’s main campaign. Invite a friend to play the DLC with you in co-op with Buddy Pass, even if your friend does not own the DLC. Pagan: Control is available now.

Is this the past character you were waiting for to come back into the Far Cry fun or was this one you wanted to stay gone? Do you think we will see Pagan become more of a sympathetic villain in the mix or will we just see someone go through that "one bad day" and make the turn? How do you think the children will get played up in this DLC and will it be a very dark event that we have to go through here? Let us all know down in the comments and then feel free to discuss it all. More for Far Cry 6 is on the way and in the works. So be sure to keep checking back for all of that and everything else that we can add to the site.