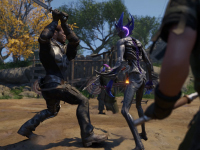 Get your weapons and controllers all ready, as here we go with new combat for ELEX II. Well, new-ish given that it looks like Piranha Bytes is building on what they had out there before and now we have a little taste for it all. Just to get us all hyped up a bit more for March 1st to roll up on us and drop ELEX II on the PS4, PS5, Xbox One, Xbox Series X|S, and PC. Even if it looks like the basic hack-n-slash style we have had in so many different titles out there. More so, with the inclusion of some of the creatures and enemies out there that we will be saving the world from. Just the way we like some of it all to go out there.

Most of what we see here for ELEX II is the basic melee weapon swinging with some fast and slow weapons out there. We will also be able to take the fight to the air here again too, which we have a slight look at in the mix too. That and a little taste of the extra powers and abilities that will be mixed in once again for ELEX. It is hard to tell any of the specifics here, but thankfully we do not need to wait too much longer for us to dive in once more and see how much carried over. It does look like it will hold up just as well as we saw before.

The Invasion has begun! An enemy force has landed on Magalan, bringing death and destruction to the planet and all its inhabitants. There’s only one way to stop them: fight them with everything you’ve got. Let fire rain on them, shoot them with guns, bows, rockets, or laser weapons. Hack them, slash them, and smite them with your sword, ax, or chainsaw, or whatever weapon suits you best. ELEX II lets you choose how to fight using melee, magic, or ranged combat — or a combination of all three. You can learn every skill, and you can master every weapon — it's all up to you.

Check out how Jax gets rid of his enemies in the new ELEX II.

Are you getting excited to see where ELEX has evolved to or were you outside of the small cult following it has already? Do you think it will function more than just a basic hack-n-slash game or will it be another in the growing mix? How often do you think we will fight in the air and will it be a bigger focus this time around? Tell us what you are thinking down in the comments and then feel free to discuss it all. More for ELEX II will be coming. All you need to do is keep a close eye on the site for all of that and much more.