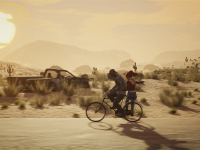 I am all about getting new and unique IPs out in the mix with the normal rehashes and sequels we have, and here we go with Showa American Story. A new RPG coming from 2PGames and NEKCOM for the PS4, PS5, and PC. A new RPG that will take us down an alternate history path where the United States has been bought out by Japan, zombies and monsters roam the lands, and there is a need for an anime-style hero who is cleaning up the streets while searching for her sister. Showa American Story sounds just as insane as the gameplay we have to reveal it all here looks. Not to mention offer up a whole new IP for us all to dive right into if we so choose.

The above sums up some of the basics we have for the story of Showa American Story, and the gameplay offers up a fun little look at it all. Also while giving us a solid look at how much action we will have to undertake in Showa American Story with the characters and the weird over-the-top weapons collected along the way. Last I checked, a giant drill bit was not a normal weapon to be found in the mix of the world here. It does, however, feel right at home in a game described as it is here. All while giving us a bit on the DmC side of the coin for action. That is at least the assumption based on the gameplay we do have to look at.

Showa American Story is a brand new RPG and an enthusiastic love letter to the 80s pop culture that features a strong taste of B-Movie.

Players will play as Choko, a teenage girl miraculously revived from the dead, and embark on a journey of truth and revenge across the United States, the country under Japanese "Cultural Colonization" long before a mysterious catastrophic incident changes the whole world drastically while meeting different people, overcoming difficulties and trying to live a better life in this long post-apocalyptic adventure.

Showa 66, Japan has bought out most of the United States with its strong economic power.

A surge of immigration has firmly planted Japanese culture within the American continent.

The United States, once a world leader, has become an unofficial colony of Japanese economics and culture, and the two cultures are rapidly amalgamated.

Although conflicts are inevitable, citizens are gradually adapting to a life never imagined as time goes by. However, a mysterious catastrophic incident changes the world drastically.

Zombies and monsters that are only seen in the movies appear everywhere, the social order is long gone.

19-year-old action movie stuntwoman Choko and her sister have come to Hollywood, now named New Yokohama, to audition for a part in a new film.

Assassinated on arrival by mysterious agents, Choko's body is buried in the wilderness on the outskirts of New Yokohama, and her sister is nowhere to be found. An unknown amount of time passes, and air fills Choko's lungs once more as she rises from the soil.

By some miracle, she's still alive, but something about this world is very wrong.

Zombies roam the streets, monsters and a few remaining humans compete for scarce resources. Criminal underworlds are at war with each other while a mysterious organization fights back to rebuild social order.

Recovering a vehicle from a movie studio ruins, Choko embarks on a journey across the United States to find her sister. But what lays in wait for her on the way? What has unfolded during Choko's slumber?

How are you feeling about this announcement for Showa American Story and does it fit with the basic description for you? Are you getting the DmC vibes from it too or is it more like a Lollipop Chainsaw ordeal? Do you like seeing this style of alt-history and timelines in your games or will this be too "off" for you? Give us all of that feedback down in the comments and then feel free to discuss it all. There will be more for Showa American Story and we will have it all here. Just be sure to keep checking in for all of that and much, much more. I am sure we will not be let down.