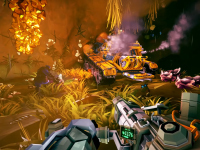 This week we got the news that Deep Rock Galactic was going to be part of the PlayStation Plus line up, but there seemed to be many out there that have not heard of the game before now. Myself included. To help correct that, and show off some of the accolades, it seems as if Ghost Ship Games and Coffee Stain opted to make sure we all knew at least the basics for Deep Rock Galactic. That all, of course, means that we have a new trailer to look at for the game before January 4th. That is if you are not just going to play it on the Xbox One and PC right now. The PS4 and PS5 gamers are the ones that have to wait for the new year.

As you will be able to see here for Deep Rock Galactic, we will be taking out our team of dwarves o the mines to take on all that the procedurally lands have to offer. Both in the ore as well as in the alien creatures out there we will have to defend ourselves against. Although, if we are the invading army, are we really the defenders? No matter the case, we will have to do that in Deep Rock Galactic while making note that all of the lands can be broken down for our use. Something that maybe the enemies will be able to utilize here too, but I guess we will have to wait until next week to find out on the PlayStation here.

Were you fully up on Deep Rock Galactic or will you be dipping your toes in now that it will be hitting the PlayStation? Is it odd to still have these gaps in releases for third-party publishers or will it always be this way moving forward? Could the enemies just destroy the world to get to you or is there a better reason that is not part of the gameplay? Let us all know down in the comments what you are thinking and then feel free to discuss it all. If there is more for Deep Rock Galactic, we will share it with you here and on our socials. Just be sure to keep checking in for everything we will have to offer up.